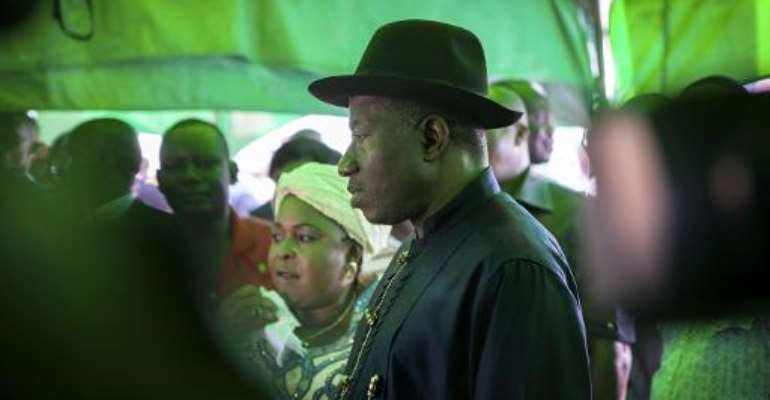 Nigerian president Goodluck Jonathan arrives to cast his ballot during presidential elections at a polling station in Otuoke on March 28, 2015. By Florian Plaucheur (AFP/File)

Abuja (AFP) - Nigeria's President Goodluck Jonathan has approved the closure of all land borders ahead of this weekend's regional elections, after a similar move was made before national polls last month, a statement said Wednesday.

The closure will take effect from midnight (2300 GMT) on Wednesday until 12:00 pm on Sunday following the governorship and state assembly elections, said Abubakar Magaji, permanent secretary at Nigeria's Interior Ministry.

The ministry said the move was designed "to allow for peaceful conduct" of Saturday's vote.

Nigeria is bordered by Benin to the west, Cameroon to the east and also had borders with Chad and Niger in the north.

The March 28 general elections -- which saw Jonathan lose to challenger Muhammadu Buhari in Nigeria's first ever democratic transfer of power -- were largely peaceful.

But security fears remain high ahead of this weekend's vote.

Nigeria's state governors hold significant power and competition for the posts can be fierce nationwide.