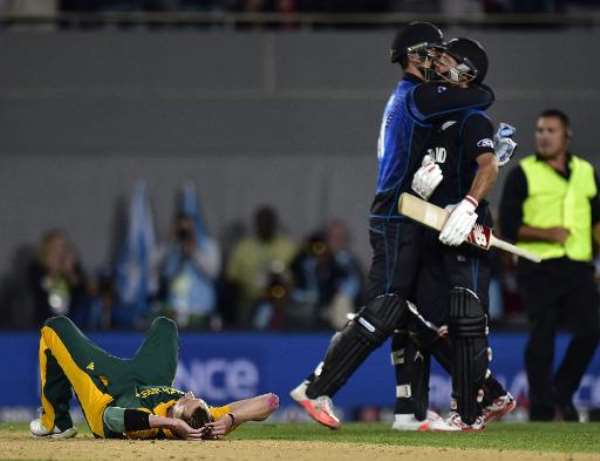 Wellington (AFP) - New Zealanders hailed the Black Caps' cliffhanger World Cup semi-final win over South Africa as one of the country's top sporting moments on Wednesday and finally began dreaming of even greater glory in the tournament decider on Sunday.

"One to go," trumpeted the front page of the New Zealand Herald, while the Dominion Post's back page headline described victory over the Proteas at Eden Park as "The stuff that dreams are made of".

There was also relief at a four-wicket win achieved with just one ball to spare that propelled New Zealand into the final for the first time after a run of six losses in the semis.

Former Black Cap bowler Jacob Oram said Brendon McCullum's men had shown their class against a dangerous South African side and should be favourites in a tournament where they remain undefeated after eight matches.

"It looks at the moment like nothing daunts them," he told commercial radio.

"The bigger the expectation, the more that's asked, the bigger they stand up. I honestly don't think this World Cup final is going to daunt these guys."

Long-suffering Black Caps fans have endured many disappointments over the years but pundits said it was finally time to start believing the team could deliver against either Australia or India in Melbourne on Sunday.

"Dare to dream, New Zealand " advised Fairfax cricket writer Fred Woodcock, adding: "If you didn't think these Black Caps had the mental strength to go the whole way, you should now, because they stood up under the pressure that defines teams."

NZ Herald columnist David Leggat even suggested the spectacle at Eden Park exceeded the Rugby World Cup final at the same venue in 2011, when New Zealand edged France 8-7 -- unheard of praise in the All Blacks-obsessed nation.

"Rugby people will swear the 2011 final can't be beaten for drama and sheer occasion," he wrote. "Fair enough, but to these eyes, this was special."

There was also praise for Johannesburg-born Grant Elliott whose 84 not out, capped with a stunning six off the penultimate ball, made him an unlikely match-winner.

The Herald's Dylan Cleaver pointed out Elliott was a last-minute inclusion and many, including himself, had favoured youngster Jimmy Neesham over the 36-year-old.

"It will now be remembered as one of the most inspired selections in New Zealand cricket history," he said.

Cricket World Cup's New Zealand chief executive Therese Walsh said the atmosphere at Eden Park was the most intense she had experienced at a match, reflecting the way the event has gripped the country.

"That euphoria at the end. I can't remember another time it's been like that. People hugging, crying. It was an amazing New Zealand moment," she told Radio New Zealand.

Walsh noted the match ended New Zealand's co-hosting duties, with the remaining semi-final set for Sydney on Thursday and the final in Melbourne on Sunday.

"To get through the last six weeks, 23 games across the country, with this fabulous weather, such exciting cricket," she said.

"Half the games were sellouts and we've had hundreds of thousands of Kiwis through the gates. It's just taken the country by storm and we couldn't be happier."