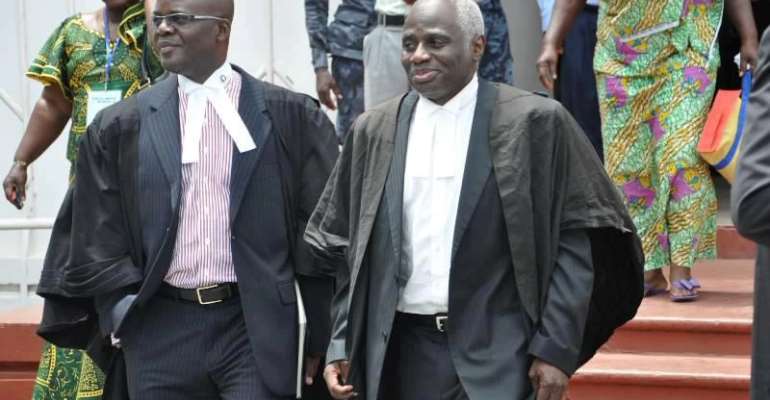 Martin Amidu
In his latest statement on the Woyome scandal, Martin Amidu, has rejected a suggestion by Tony Lithur to take his grievances and allegations against partners of Lithur, Brew & Co to the General Legal Council.

The former Attorney General said, “I am too experienced to take the bait of the line of least resistance favourable to Lithur, Brew & Co being suggested to the innocent public when there are more effective and punitive remedies available to me at an appropriate time and place of my choosing.”

“…. Go and convince mentally exhausted persons to do so!” Amidu lunged at Lithur.

Tony Lithur, a partner of the law firm, and counsel for President John Mahama during the 2012 election petition, asked Mr Amidu to proceed to the General Legal Council on allegations his law firm and partners, benefited from the fraudulent GH¢51 million judgment debt paid to businessman Alfred Woyome.

The Attorney General, Marietta Brew Appiah-Oppong, who is currently pursuing efforts to retrieve the fraudulently paid judgement debt to Mr Woyome was also a partner in Lithur, Brew & Co.

Both Mr Amidu and Mr Woyome agree Marietta Brew Appiah-Oppong's pursuance of the wrongly paid judgement debt is unethical because her firm received about GH¢3.7 million from the GH¢51 million when the firm worked with one Ray Smith who was once a business partner of Mr Woyome.

The Attorney General has denied the allegation. Mr Lithur also maintains if Mr Amidu has any facts to support his allegations, he should take them to the correct forum – the General Legal Council.

However, Mr Amidu said in a rejoinder to Mr Lithur's previous statement that heeding to that call would be to act unreasonably.

” Why had I refused to go to the police with a complaint of perjury and abetment of perjury because of the relationship of Lithur, Brew & Co to the Government and Mrs. Brew Appiah's position as a member of the General Legal Council nominated by Betty Mould-Iddrisu when she was Attorney General but will now go to the General Legal Council at a time the Attorney General who is from the same firm is an ex officio member of the Council? I am too experienced to take the bait of the line of least resistance favourable to Lithur, Brew & Co being suggested to the innocent public when there are more effective and punitive remedies available to me at an appropriate time and place of my choosing”, he said

He adds: “Lithur, Brew & Co are so politically deeply married and in bed with the John Dramani Mahama Government that I will be exhibiting crass inexperience and unreasonableness in prosecuting their misconduct and other acts now. The statute of limitation does not apply to certain acts, so I am at liberty to choose how and when to deal with the perjury and abetment of perjury involved in this case. I have eyes and brains to see how Ray Smith has been protected from criminal prosecution just because of having one of his lawyers appointed an Attorney General, to make a complaint affecting that Attorney General, her law firm, and the same Ray Smith while she encumbers the office of the Attorney General. Go and convince mentally exhausted persons to do so!”.

An Accra High Court two weeks ago freed Mr Woyome, who had been charged with two counts of causing financial loss to the state and defrauding by false pretence after he was accused of illegally receiving a little over 51 million Ghana Cedis in 2010 for his role in the construction of stadia for the CAN 2008 tournament held in Ghana.