The Great Land Giveaway In Mozambique

By Timothy A. Wise 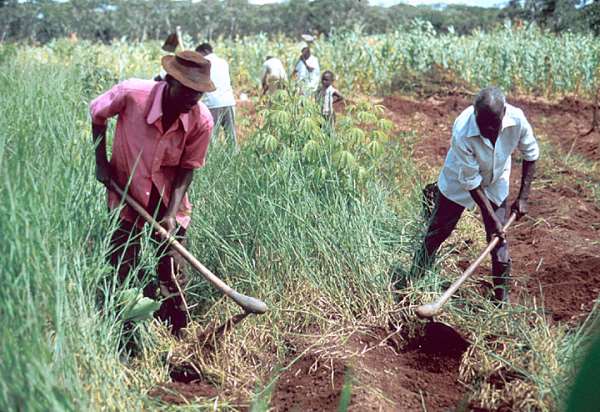 From The March/April Issue Of Dollars & Sense Magazine

I introduced myself to Luis Sitoe, economic adviser to Mozambique's minister of agriculture, and explained that I'd spent the last two weeks in his country researching the ProSavana project, decried as the largest land grab in Africa. This ambitious Brazil-Japan-Mozambique development project was slated to turn 35 million hectares (over 85 million acres) of Mozambique's supposedly unoccupied savannah lands into industrial-scale soybean farms modeled on—and with capital from—Brazil's savannah lands in its own southern Cerrado region.

Mr. Sitoe smirked. “Did you see ProSavana?” I hadn't, in fact. “So far there is no investment in ProSavana,” he said, with surprising satisfaction considering that the project's most ardent supporter had been his boss, agriculture minister José Pacheco.

A firestorm of controversy had dogged the project since its “Master Plan” had been unceremoniously leaked in 2013. Farmers were actively resisting efforts by foreign investors and the government to take away their land. And Brazilian investment was almost nowhere to be found.

Had the land-grab boom gone bust? Was ProSavana's stuttering start a sign that African farmland had lost its luster? No, but it turns out to be easier to get a government to give away a farmer's land than it is to actually farm it.

Reality Asserts Itself
Data from the Land Matrix project suggest that economic realities have begun to assert themselves. Commodity prices are down, speculative capital has returned to rebounding stock markets, low oil prices have cut the profit margins on biofuels. Oil and gas discoveries in some developing countries, meanwhile, have taken the wind out of the sails of domestic alternative energy projects which were fueling some land-grabbing.

As a result, the pace of large-scale land acquisitions has slowed, many projects have failed, and those underway often operate on a fraction of the land handed over to them.

National governments—perhaps the most willing negotiating partners in this often-ugly process—have ceded the rights to large tracts of land to foreign investors. As of mid-September 2014, Land Matrix had recorded 956 transnational land deals completed globally since 2000, with another 187 under negotiation. The completed agreements, most of which have taken place since 2007, cover 61 million hectares (about 150 million acres), with about half of that land under formal contract. Interestingly, of the 37 million hectares under contract, only 4.1 million (just 11%) are confirmed to be in production.

The much lower acreage contracted for production reflects how hard it can be to turn vague intentions, and government concessions, into concrete business plans. Hardest of all is putting those plans into operation, which involves dealing with weak regional markets, poor infrastructure, and—most importantly—resistance from local residents currently using the land.

By all accounts, ProSavana stalled before it could even register as a productive project in the Land Matrix database. Mozambique is fifth among all target countries in the project's ranking by amount of land given away (behind Papua New Guinea, Indonesia, South Sudan, and the Democratic Republic of the Congo), with 99 concluded projects covering 2.2 million hectares. Three-quarters of that is for forestry projects. Of the agriculture projects, one finds just a few comparatively small soybean projects in the Nacala Corridor, ProSavana's target region.

Tucked in the database, one finds a grand intended but not concluded” 700,000-hectare project that lists Brazilians as the investors and the Brazilian, Japanese, and Mozambican governments as partners. ProSavana. What happened to the 35 million hectares? That was the press release, the sales pitch to Brazilian investors. Only a fraction of that land is even suitable for agriculture; much is forested or degraded. Or occupied.

The Land Matrix project, which tracks large-scale land acquisitions, defines a foreign land grab as a transfer of 200 hectares (500 acres) or more, via lease or sale, to a foreign entity intending to put the land to a new use. The project has compiled a database of such acquisitions since 2000, the vast majority of them since the food-price spikes of 2007-2008.

The picture of land grabbing that emerged in 2008 was of land or water-poor countries, panicked about their future food security, using sovereign wealth funds to snap up land to produce food for their domestic markets. China came in for particular scrutiny based on a series of highly publicized planned acquisitions. Most never materialized, and today's profile of grabbed land, from the Land Matrix project, looks quite different:

The majority of land grabs target lands in Africa. Six of the top ten target countries are South Sudan, the Democratic Republic of Congo, Mozambique, the Republic of the Congo, Liberia, and Sierra Leone. But Papua New Guinea, Indonesia, Brazil, and Ukraine are also in the top ten.

The investors are not mostly sovereign wealth funds from land-poor countries but investors from rich countries. Organization for Economic Cooperation and Development (OECD) countries—which include the United States, most of western Europe, and most other high-income countries—account for more than half of the deals.

The top land grabber—by far—isn't China but the United States, with 6.5 million hectares under contract, more than twice the level of the second-ranked investor country (Malaysia). China is eleventh on the list.

Food crops represent only about one-quarter of all acquired land. Biofuel crops or “flex crops” such as sugar—for either sweetener or ethanol—account for nearly as much acquired land, as do forestry projects. In Africa, only 13% of agricultural land-grab projects are for food.

Perhaps most importantly, the land targeted is not unoccupied. For land on which there are data about former use, the majority was in agriculture—with the majority of that being cultivated by small-scale farmers. – Timothy A. Wise

Fundamentally Flawed
Frankly, I was surprised to find ProSavana to be such a bust. This wasn't some fly-by-night venture capitalist looking to grow a biofuel crop he'd never produced for a market that barely existed. That's what I saw in Tanzania, and such failed biofuel land grabs litter the African landscape.

ProSavana at least knew its investors: Brazil's agribusiness giants. The planners knew their technology: soybeans adapted to the tropical conditions of Brazil's Cerrado. And they knew their market: Japan's and China's hog farms and their insatiable appetite for feed, generally made with soybeans. That was already more than a lot of these grand schemes had going for them.

But ProSavana foundered because its premise was fundamentally flawed. The Grand Idea was that the soil and climate in the Nacala Corridor were similar to those found in the Cerrado, so Brazilian technology could be easily adapted to tame an uninhabited region inhospitable to agriculture.

It turns out that the two regions differ dramatically. The Cerrado had poor soils, which is why it had few farmers. Technology was available, however, to address soil quality. The Nacala Corridor, by contrast, has good soils, which is precisely why the region is the most densely populated part of rural Mozambique. If there are good lands, you can pretty well bet people have discovered them and are farming them.

Democracy and Resistance
Mozambique has one other thing Brazil didn't have when it tamed the Cerrado: a democratic government forged in an independence movement rooted in peasant farmers' struggle for land rights. At the time of Brazil's soybean expansion in the mid-1980s, a military dictatorship could impose its Cerrado project. Mozambique has one of the stronger land laws in Africa, which prevents private ownership of land and grants use rights to farmers who have been farming land for ten years or more—whether they have a formal title or not. Even if the government is now siding with foreign investors, it has laws through which an increasingly restive citizenry can hold it accountable.

What may end up dooming ProSavana is farmers' growing awareness of the threat to their land, and their capacity to resist. Spearheaded by União Nacional de Camponeses (UNAC), Mozambique's national farmers' union, the campaign to stop the project formed quickly, fueled by a Mozambican tour of the Cerrado organized with Brazilian farmer groups. The images of unending expanses of soybeans, without a small farmer in sight, and the tales of environmental destruction spread quickly through Mozambique.

Within months of the release of the Master Plan, a tri-national campaign in Japan, Brazil, and Mozambique formed. An open letter to the heads of government of the three countries caused a stir, particularly in Japan where the country's international development agency was accused of violating the long-standing separation of development assistance from commercial interests.

Last year, the campaign adopted a firm “No to ProSavana” stance until farmers and local communities are consulted on development plans for the region.

Local resistance to specific land deals may have had an even greater impact. That certainly scared off some of the largest Brazilian investors, who complained not only that they couldn't own the land outright, but that it took a negotiation with the national government and then further negotiations with local governments just to get a lease. Even then, that lease was for land that was anything but unoccupied. Most packed up their giant combines and went home.

No End to Land Grabbing
I asked Mr. Sitoe in the Ministry of Agriculture if the lesson of ProSavana was that agricultural development needed to be based on Mozambique's three million small-scale food producers. He smirked again. No, he assured me, the government is committed to foreign investment, with its capital and technology, as the path to agricultural development.

He pulled out a two-inch-thick project proposal for a 200,000-hectare foreign-funded scheme for irrigated agriculture along the Lurio River, on the northern edge of the Nacala Corridor. Was this part of ProSavana? No, he reassured me with another smile. That brand was clearly tarnished.

Had farmers and communities in the region been consulted about the Lurio River project? “Absolutely not,” said Vicente Adriano of UNAC. In the words of the Mozambican independence movement, La Luta Continua—the struggle continues.