MSF and WHO trade blame over slow global Ebola response 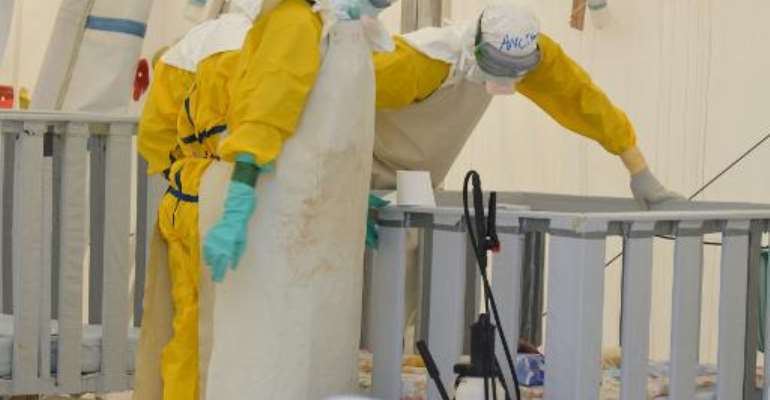 Health workers with 'Doctors Without Borders' wear protective gear whilst working at an Ebola treatment centre in the Liberian capital Monrovia on January 27, 2015. By Zoom Dosso (AFP/File)

Paris (AFP) - A war of words broke out Monday between aid agency Doctors Without Borders and the World Health Organization over who was to blame for the slow response to the Ebola epidemic that broke out a year ago.

Doctors Without Borders released a scathing report on the global response to the epidemic, which has killed more than 10,000 people and infected nearly 25,000 since it was identified in March 2014, mostly in Guinea, Liberia and Sierra Leone.

The aid agency -- known by its French initials MSF -- said "months were wasted and lives were lost" because the UN's World Health Organization, which is charged with leading on global health emergencies, and "possesses the know-how to bring Ebola under control," failed to respond quickly or adequately.

But the WHO hit back on Monday, saying it was MSF that had not alerted them to the earliest cases.

"It would have been much easier to control this outbreak had we known in January or December when the very first case occurred or the first cluster," said WHO spokesperson Margaret Harris on BBC Radio 4.

"That was investigated by a group that unfortunately did not involve WHO and you can ask my colleague at MSF a little more about that," she said.

MSF's general director Christopher Stokes responded that those earliest cases happened in very remote areas, and that it took time to confirm they were Ebola.

"Once the confirmation was obtained in mid-March, that's when you have to kick in all your resources and you have to deploy massively," he told the BBC.

"But the very next day the WHO said we were exaggerating."

The WHO has acknowledged its response was slow and insufficient, and has set up an independent review that will report back in May.

The MSF report accused the WHO's Global Alert and Outbreak Response Network of ignoring desperate pleas for help from Liberia when it met in June.

"It was early in the outbreak and there was still time. The call for help was heard but no action was taken," said Marie-Christine Ferir, MSF emergency coordinator.

The WHO did not set up a regional hub for coordinating the response until July, by which time a second wave of the epidemic had struck.

"All the elements that led to the outbreak's resurgence in June were also present in March, but the analysis, recognition and willingness to assume responsibility to respond robustly were not," the report said.

Particularly in the early months, much of the burden fell on MSF's shoulders, but the organisation had only 40 staff with Ebola experience.

"We couldn't be everywhere at once, nor should it be our role to single-handedly respond," said Brice de le Vingne, MSF director of operations.

It was only when a US doctor and Spanish nurse were diagnosed with Ebola that the world woke up to the threat, MSF said.

MSF also blamed the governments of Guinea and Sierra Leone for refusing to admit to the scale of the epidemic, and putting "needless obstacles" in the path of MSF teams.

The crisis sparked the biggest training programme in MSF history, which deployed 1,300 international staff and 4,000 locals.

It was initially focused on Guinea and Sierra Leone. However, when aid agency Samaritan's Purse withdrew from Liberia after the US doctor's infection, MSF faced a wrenching decision: abandon the country or take the risk of pushing its over-stretched staff still further.

"We couldn't let (Liberia) sink further into hell," said de le Vingne. "We would have to push beyond our threshold of risk, and we would have to send coordinators without experience in Ebola, with only two days of intensive training."

MSF built a 250-bed centre in Liberia's capital Monrovia, but even that was far from enough. The centre was able to open only 30 minutes each morning, filling beds vacated by deaths overnight.

The report describes people dying on the gravel outside the gates, and a father who brought his daughter in the boot of his car, begging MSF to take her in so as to not infect his other children at home, but who was turned away.

There were so many patients and so few employees that the staff had on average only one minute per patient.

"This Ebola outbreak has wrought an exceptionally heavy toll on MSF's staff, and particularly on our west African colleagues," the report said.

"Not since the early days of HIV care have MSF staff sustained the loss of so many patients dying in our facilities and never in such an intense short period of time," the report concluded.