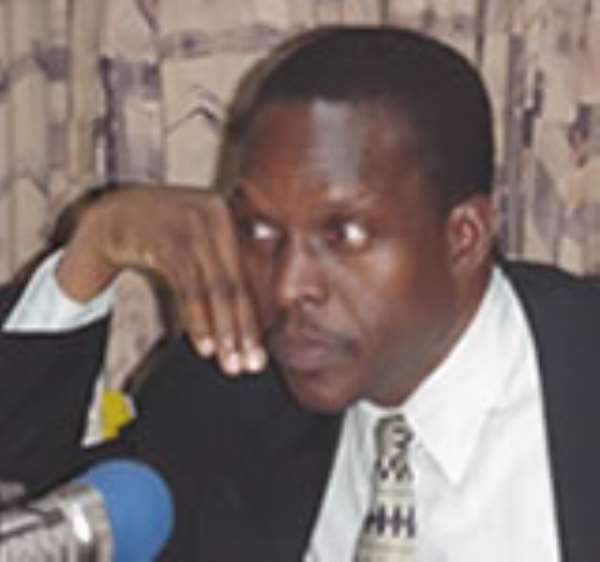 ...Gbagbo, Blaise Compoare 'dis' him over Prez CREDIBLE intelligence picked up by the GYE NYAME CONCORD Friday evening from diplomatic sources close to the Ivorian and Burkinabe governments has indicted Minority Leader and MP for Nadowli North, Hon Alban Bagbin.

By press time Saturday night, Abidjan diplomatic sources say President Laurent Gbagbo was fuming over a reported statement by the Minority Leader on Kwaku Sakyi Addo's “Front Page” programme on JOY FM the previous day, suggesting that he (Bagbin) had been personally told by Gbagbo that they had lost faith in President Kufuor.

According to Bagbin, he was personally told by the Ivorian leader that all the factions in the Ivroian crisis have lost faith in Kufuor's ability to resolve the issue and have lost respect for him. He added that this was why the respected UN Secretary General Kofi Annan was roped in to help settle the issue.

He is also reported to have added that the celebrated UN Secretary General Kofi Annan was only invited to attend the mini-summit to help save face for the Kufuor administration.

But Gbagbo, this paper learnt has issued a disclaimer in which he chastised the Minority Leader for what was perceived in Abidjan as an incredulous statement.

Abidjan sources say he has even denied knowledge of Bagbin and chastised him for economising on the truth in a letter to the Kufuor administration.

The Burkinabe President, Blaise Coampare, whose government had had some minor friction with the Ghanaian government in recent times over their positions on the Ivorian crisis, was equally livid that his name was cited in the interview.

Consequently, Burkinabe diplomats in Accra have been issued with a fiat to take necessary measures to distance their leader from the statement, French-speaking diplomats confirmed to this paper.

Several efforts to reach the Minority Leader on his phone by press time proved futile as a message indicating he was out of 'coverage area' kept popping up.

Incidentally, during the Ivorian meeting in Accra, all the factions agreed to commence Disarmament, Demobilisation and Re-integration (DDR) by October 15 this year on the basis of a specific timetable in accordance with the relevant provisions of the Linas-Marcoussis Agreement and decisions adopted on DDR in the Grand Bassam and Yamoussoukro.

The agreement was contained in an 18-point resolution known as 'the Accra III Agreement on Cote d'Ivoire.'

The mini-summit was held under the auspices of the President Kufuor and UN Secretary General Busumuru Kofi Annan, and was attended by 17 African Heads of State and Government and representatives of the political parties in Cote d'Ivoire.

The Summit encouraged all the parties to the conflict to implement fully the Linas-Marcoussis and ACCRA II Accords to facilitate the conduct of free, fair, credible and transparent elections in Cote d'Ivoire in October.

The Cote d'Ivoire crisis broke out on September 19, 2002, when soldiers mutinied and it turned into a coup attempt.