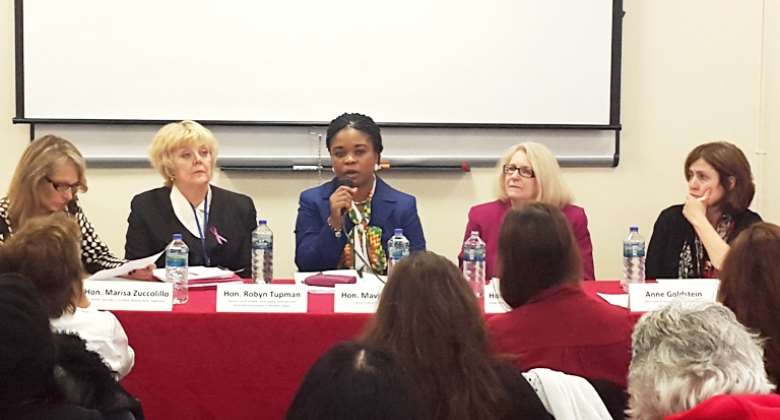 All members of the criminal justice system, including trial court judges, prosecution, and defense counsels are being urged to play complementary roles to prevent re-victimizing victims of sexual assault.

Ghanaian District Court Magistrate, Ms. Mavis Kwainoe made the call during a United Nations panel discussion on how courts could prevent re-victimizing victims of sexual violence.

The panel discussion, which was under the auspices of the UN Commission on the Status of Women, was organized by the International Association of Women Judges (IAWJ) and the Avon Global Center for Women and Justice, Cornell Law School, New York.

Themed “Ensuring Courts Do Not Re-Victimize: Making Beijing's Commitments a Reality”, it attracted judges from Australia, Argentina, United States, and Ghana to the UN headquarters in New York.

Ms. Kwainoe said judges in trial courts could prevent re-victimizing victims by prohibiting aggressive cross-examination, disallowing questions that are intended to intimidate and humiliate, and showing reasonable levels of empathy without sacrificing the judges' role as a neutral arbiter.

“Sometimes if victims break down in tears during cross-examination, it should not be out of place for a judge to take a break and allow them some time to regain their composure, or even adjourn the case”, Ms. Kwainoe advised, adding that trial judges could at the same time protect the rights of the accused by upholding the “innocent until proven guilty principle” in criminal justice.

She reminded prosecutors and defense counsels that since victims could be traumatized, it is important to prevent the use of tactics that would “re-traumatize victims of sexual violence”.

Ms. Kwainoe, a Thomas Burgenthal Scholar, George Washington University Law School, therefore, stressed the need for special protection and counselling for child victims prior, during, and after trials.

In an overview, panelists shared perspectives with several lessons for Ghana, including general prohibition on questioning a victim's sexual history, redacting information that identifies a victim, using closed circuit television to record a victim's testimony to prevent intimidation of victims, providing counseling, and ensuring that both the victim and defendant have adequate representation.

Sharing the Australian experience on steps that had been taken to prevent re-victimizing victims of sexual violence, Robyn Tupman, District Court Judge, New South Wales, said Australia had passed a legislation that prohibits asking questions about a victim's sexual history, and that if a party wanted to question the sexual history of a victim, there should be a pre-trial conference to rule on the relevance of the victim's sexual history to the trial.

Judge Tupman regretted that even with such safeguards in place, defense counsels sometimes violate this rule, and when there is such a breach, counsels are questioned about the relevance of the question to the trial.

She explained that in addition to legal and courtroom safeguards, victims are allowed to submit their testimonies via Closed Circuit TV (CCTV), which helps defendants to avoid having physical contact with victims to reduce intimidation.

Judge Patricia Henry of the Integrated Domestic Violence Court, Kings County, New York, outlined how New York law interprets what is permissible enquiry during a trial, explaining that judges still have latitude in determining whether questions are permissible or have an element of harassment embedded in them.

Marisa Zuccolillo, Judge, Criminal Court in La Plata, Buenos Aires, Argentina, told the panel that Argentina's ability to check re-victimization was actualized when it ratified international human rights instruments and incorporated them into domestic laws with the goal to ensuring protection for all persons before the court, including victims and accused persons.

Anne Tierney Goldstein, a co-moderator and Human Rights Education Director, International Association of Women Judges, emphasized the need for the criminal justice system to prevent re-victimization of victims, emphasizing, “Courts are places where victims go to seek justice and not to be re-victimized”.

Elizabeth Brundige, Executive Director, Avon Global Center, and Assistant Clinical Professor of Law, Cornell Law School, shared findings of a study on best practices at protecting victim-witnesses and child victim-witnesses, and opined that among several best practices is the non-disclosure of a victim's identity, especially when related to sexual violence, a practice which Ghana is yet to adopt.

It would be recalled that in one of such cases in Ghana, a 19-year old victim of an alleged rape whose identity was not redacted in court documents, withdrew from the case, citing “media frenzy” and lack of sensitivity towards her.