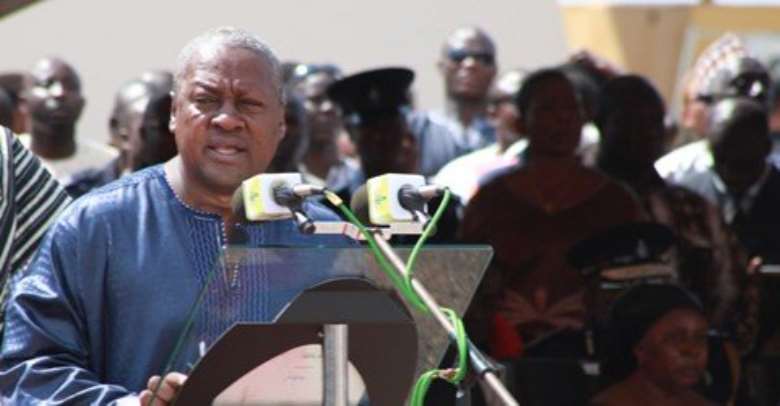 An umbrella body for Muslims in Ghana has lauded President John Mahama's effort to promote peaceful co-existence between Christians and Muslims in the country.

According to the Federation of Muslim Councils of Ghana (FMC) a recent call by the President on the need to respect rights of Muslims in schools across the country is the right way to go, and has expressed disappointment that call was misconstrued by a section of the public.

"The FMC have also noted with satisfaction that the government intends to work for unity and understanding among religious groups in Ghana. We support the government to go ahead with this move by working with all concerned stakeholders. This is because Ghana is one nation one people with a common destiny", FMC said in a statement to the press.

Read below the full statement:
The Federation of Muslim Councils of Ghana (FMC) wishes to commend His Excellency John Dramani Mahama for taking steps to promote peaceful co-existence between Muslims and Christians in Ghana.

The protest by Muslims in the Western Region and the subsequent call by the President to respect the rights of Muslims was not the first time concerns have been raised about harassment of Muslim pupils and students in certain Basic and Second-Cycle Schools across the country. As an umbrella organization for Muslims in Ghana the FMC has on several occasions raised these concerns with the Ministry of Education and Ghana Education Service and called on both to see to the enforcement of the rights of Muslims students to practice their religion and save them from non-Islamic practices while in school.

For instance, on March 7, 2012, a delegation of the FMC met with then Minister of Education, Ambassador Lee Ocran following disturbing media reportage of alleged persecution of Muslim students and pupils in public Basic and Second-Cycle Schools.

At the meeting with the Honourable Minister, the FMC recalled the chilling death on Sunday, March 16, 2008 of Master Mustapha Abdul Gafaru, a student of Adisadel College who jumped to his death from a storey building as he was being pursued by the Senior House Master of the school to attend the school's church service.

Even though a Committee was set up to look into the matter, nothing has not come out of that.

The FMC also reminded the Honourable Minister of the White Paper issued in 1996 by the then Deputy Minister of Education, Hon. Kwabena Kyere, directing all schools that “students of minority religious groups should not be forced by school authorities to worship with majority religious groups in schools”, a directive which was later reiterated in 2008 by the then Director-General of the Ghana Education Service, Mr. Samuel Bannerman-Mensah.  In spite of these directives, harassment of Muslim children in Ghanaian public schools, which are funded by the tax-payer's money, including that of Muslims, continue unabated.

The FMC finally asked the Ministry of Education to take immediate steps to operationalise its own White Paper issued in 1996.

The FMC was awaiting the Honorable Minister's directives on our concerns when he was replaced by Prof. Naana Jane Opoku-Agyemang. Passionate as the FMC was and still is with these matters, the FMC in March 2013 met the current sector Minister. The meeting resulted in the setting up of a Committee jointly headed by the then Director of Secondary Education (GES), Rev. Asigri and the then Director, Basic Education (GES), Mr. Stephen Adu, now Acting Deputy Director-General of GES, to look into the matter, but all to no avail.

The FMC is of the view that had the Ministry of Education and the GES heeded the call of the FMC to operationalise the Ministry's own 1996 White Paper directives, it would have been needless for the President to make any pronouncement or give any directives on religious tolerance today.

The FMC is, however, disappointed that what was intended to be a harmless call by H.E. the President for respect of the rights conferred on citizens of Ghana, including Muslims has generated acrimonious exchanges and threatening the centuries-old peaceful coexistence between Muslims and Christians in Ghana.

The FMC have also noted with satisfaction that the government intends to work for unity and understanding among religious groups in Ghana. We support the government to go ahead with this move by working with all concerned stakeholders. This is because Ghana is one nation one people with a common destiny.

Without prejudice to the outcome of the Supreme Court action on the matter the FMC hereby accepts the request for dialogue by the Christian Council of Ghana. This will stop further degeneration of the matter and demonstrate to all and sundry our collective resolve to live in peace as one people as Allah reminds us in His Holy Book, the Noble Qur'an, (Chapter 49: Verse13) thus: "O Mankind! We have created you from a male and female, and made you into nations and tribes, that you may know one another. Verily, the most honorable of you in the sight of Allah is the most righteous amongst you. Verily, Allah is All-Knowing, All-Aware." Noble Qur'an (49:13)