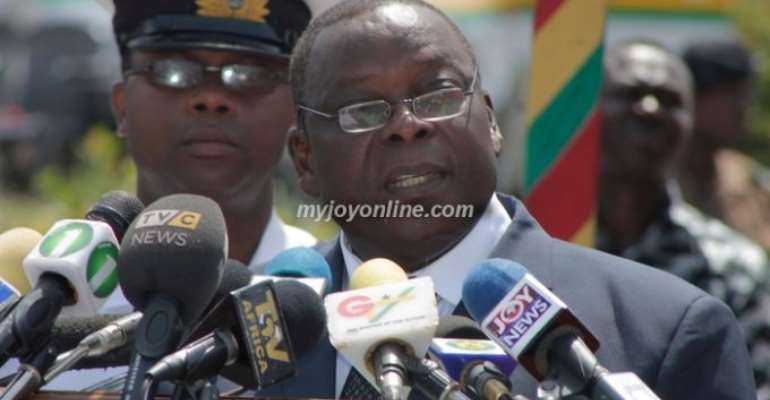 Interior Minister, Mark Woyongo, has revealed he got a wind of the fraudulent recruitment exercises at the Ghana Police Service some four months ago.

He told host of Super Morning Show on Joy FM, Kojo Yankson, in an exclusive interview, that he discovered the scam in December last year when he had gone to the Northern Region for holidays.

"My constituents came to me asking me to help them get admission into the police training colleges. And I told them we were not recruiting. They said 'how, they are recruiting'...they said some people have gotten letters", he said.

Mr Woyongo said after requesting to see a copy of the so-called admission letter, he realised - after critical examination - that the letters bore the signature of COP Patrick Timbillah - who has been interdicted over a recruitment scandal that has hit the service.

The Interior Minister said he immediately called the Inspector General of Police (IGP), Mohammed Alhassan, to inquire about the matter, but the police chief apparently had no knowledge of any recruitments, confirming that the letters may be a scam.

"So I went further to probe and got pay-in slips, monies they paid into some bank accounts - Stanbic Bank on the Spintex Road. So I then call COP Timbillah and told him what I had seen and what I had got. So he said that that's fine, he would follow it up.

"A few days later I called back for the feedback and he said they had put a ban, an embargo on the account on the Spintex Road", he said.

The Interior Minister revealed COP Timbillah promised to look into the matter, and how GH¢35,000 came be deposited into the Stanbic account.

Mr Woyongo said he was even told that an arrest had been made in respect of the scam.

According to the interior Minister, COP Timbillah convinced him that efforts to arrest and prosecute more persons in the fraudulent recruitment was on going in earnest.

Mr Woyongo said he then came out to warn the public to be wary of recruitment scammers, having been convinced the police was on top of issues.

However, as things would turn out, COP Timbillah was allegedly neck deep in the scam.

Mr Timbillah was interdicted last Friday and placed under house arrest after his involvement was uncovered by an investigative taskforce.

He cannot have access to his office, or the Police Headquarters, or come close to any police facility.

Mr Timbillah, however, has not been formally charged with an offence since investigation is still ongoing.

Meanwhile, Mr Woyongo has revealed that there are plans to punish persons who fall prey to recruitment scammers in a bid to nip the practice in the bud.