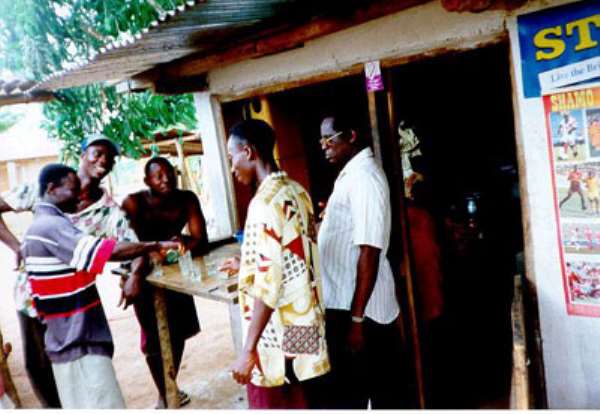 At least 60% of drinking bars in Koforidua and its surrounding communities sell imitation drinks, especially alcoholic beverages like gin, instead of the original ones approved by the Ghana Standards Board (GSB). Additionally, most of the sachet water or bagged pure mineral water on the market are fake, not tested by the Foods and Drugs Board(FDB) or GSB but are placed on the market by the producers.

These became evident, following an undercover investigation conducted by The Chronicle after receiving several complaints of serious ill health from the patronizers.

Most of the complainants spoke of severe headache, bodily pains, stomachache, running stomach, even to the point of getting heart attack and stroke, after taking some of these fake drinks and sachet water several weeks ago.

One of the complainants, popularly called Wofa Yaw, residing at Srodai, recounted how he suffered severe running stomach after he had drunk some of these sachet water produced at Mpraeso some weeks ago.

Showing a sample of the mineral water to this reporter, he angrily asked how FDB and GSB could approve of this product for consumption in the country to pose health problems, which they are to prevent.

Just when he was about to end his complaint, the phone rang and the caller, one Mr. Agyeman also had a complaint to make about severe stomach pains after taking another sachet water in Koforidua.

When Wofa Yaw called the producer of that particular mineral water to complain about his predicament after taking his water, the producer was heard at the other side, also complaining of receiving too many complaints from consumers and paying so much money (bribe?).

For the gin, it was discovered that the fakes were produced by using mahogany tree and other substances, filling them in frytol bottles and packing them into ideal meal or key soap boxes to supply the drinking bars in town.

The Chronicle investigation unveiled that they packed these imitated drinks into a Hyundai Excel minibus with registration number GR9103 in the evenings and carried the boxes as if they were hawkers selling milk or soap, entered the bars and refilled the gin bottles of the popular standardized gins where they were sold to customers at ¢500.00 or ¢700.00 a tot, whiles the real ones sold at ¢1000.00 or ¢1200.00 per sachet or tot.

This reporter managed to trace some of the culprits who came to supply the fake product in one of the bars.

They were spotted refilling the bottles within a few minutes and left to escape arrest.

Not too long after they had left, some young men came to buy drinks and soon started complaining of stomachaches and headaches.

When The Chronicle went to town, it discovered that the whole Koforidua township had been littered with empty sachet mineral water bags and various products of all kinds, all having standard board approval marks on them. Meanwhile, consumers of some of them complained when they took it.

Commenting on the issue, Mr. Emmanuel Ani-Asamoah, called on the GSB to shortlist the areas one approved of to enable the general public patronize the good ones and prevent the spread of diseases.

The Eastern Regional Police Commander, ACP Vincent Kwaku Dzakpata said no official complaint had been made to the police therefore, whoever knew anyone who produced fake products in the region should report to the police to enable arrest and prosecution since it was criminal.

As to whether they were aware of the production of unapproved mineral water and gin in the area, the Eastern Regional Head of GSB, Mr. John Ankomah, also stated that he had not received any complaint.

He said there was a little problem with Shepherd Mineral Water but it had been solved.

Mr. Ankomah called on anybody who had a problem to lodge any such complaint with the (GSB) to enable them investigate and put samples to test to find out the causes.

The regional GSB boss noted that they had teamed up with the other health inspectorate divisions, which went on rounds in the region to take surveillance of consumables to ensure their safety for the general public's good health.