Civil Rights activist brought into court in handcuffs and prison clothes
By Abayomi Azikiwe, Editor of the Pan-African News Wire 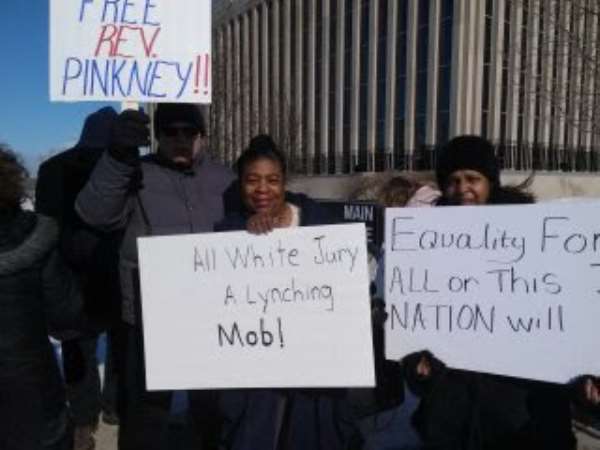 A motions hearing in Berrien County, Michigan on Feb. 27 resulted in the denial of imprisoned community leader Rev. Edward Pinkney bond pending the outcome of an appeal filed in an attempt to overturn his conviction on five felony forgery charges last year.

Pinkney was convicted by an all-white jury in November and he was sentenced to 30-120 months in prison on Dec. 15. He is currently housed at Marquette Correctional Facility, a 10-12 hour drive from his home in Benton Township.

He was indicted after a group of residents collected enough signatures of registered voters seeking to recall Benton Harbor Mayor James Hightower. Dissatisfaction with Hightower stemmed from the poor economic conditions in the majority African American city where unemployment and poverty are widespread.

Benton Harbor is a city of approximately 10,000 people in southwest Michigan. Nearly 90 percent of the population is African American yet across the bridge in St. Joseph, the seat of the county, the city is nearly all-white and far more affluent.

According to the United States Census data for 2009-2013, over 48 percent of the residents of Benton Harbor live below the poverty line. The median income per household in Benton Harbor is $18,000 annually.

The estimated per capita income for Benton Harbor is $9,500 yearly. Due to the high rate of unemployment and home foreclosures, only 35 percent of the residents live in their own homes.

Political Implications of the Case
Pinkney, who heads the Black Autonomy Network Community Organization (BANCO) in Berrien County, was charged and convicted for allegedly changing the dates on five signatures on the recall petitions. However, during the trial not one witness claimed to have seen the defendant change any dates on the petitions.

As a result of a Michigan appeals court decision the recall election was cancelled and Hightower remains in office although he is facing reelection later this year. Supporters of the recall including BANCO accused Hightower of being a surrogate of Whirlpool Corporation which is based in Benton Harbor.

During the course of the trial, Prosecutor Michael Sepic asked witnesses about their views on Whirlpool as well as questions related to the political outlook of BANCO in relationship to the multi-national firm. These questions were allowed into the court record by the presiding Judge Sterling R. Schrock.

BANCO has opposed numerous policies carried out by Benton Harbor and Berrien County officials. In 2010, a project was undertaken which appropriated the publically-owned Jean Klock Park turning it into the Jack Nicklaus Signature Golf Course on Lake Michigan.

Two years later in 2012, Pinkney and BANCO organized the “Occupy the PGA” protest demonstrations when the senior golf tournaments were held in Benton Harbor. The recall campaign against Hightower was prompted by his refusal to support a measure that would tax corporations in order to create jobs and rehabilitate the infrastructure of the blighted and economically depressed municipality.

The city has a long and sordid history of racism and police misconduct. In 2003, people rose up in rebellion after an African American motorcyclist was chased down to his death by several law-enforcement agencies in the region.

Motions Filed in Post-Conviction Hearing
At the motions hearing on Feb. 27 the courtroom was packed with supporters of Pinkney. There were at least 30 people who waited outside the proceedings because there was no room inside.

When Pinkney entered the courtroom wearing handcuffs and prison clothes, he was given a standing ovation. A law-enforcement officer then walked over to the crowd and told them they were not allowed to disrupt the courtroom.

One supporter from Ann Arbor wanted to give Pinkney a greeting card which came back in the mail from Marquette prison. He was told by officers in the courtroom that he was not allowed to do so.

Another person, an academic from Lansing, wanted to give the BANCO leader some literature contained in a package but was not allowed to do so either. When he attempted to turn over the materials to Pinkney's defense lawyer Tat Parish he was told again by the officers that this was not possible.

On at least two occasions, officers in the courtroom chastised members of the audience for supposedly making contact with Pinkney, who sat quietly in a chair next to his defense attorney. In addition to arguments from Atty. Parish, Mark Fancher, representing the Michigan American Civil Liberties Union (ACLU) was in attendance as well.

The Michigan ACLU has filed an amicus curiae brief in support of Pinkney being released on bond. Parish and Fancher argued that the activist was not a flight risk or a danger to the community, yet Judge Schrock denied the motion ordering Pinkney back to Marquette prison.

Fancher argued on behalf of the Michigan ACLU citing the People v. Hall case noting in all likelihood Pinkney should not have been indicted or convicted on felony charges, but that such an offense if found guilty, would only be a misdemeanor punishable by 93 days in jail. Although the judge set an evidentiary hearing on two of the motions filed, he would not budge on setting an appeal bond for Pinkney.

In his brief Fancher stated on behalf the Michigan ACLU that “A critical factor in the decision to grant bond is whether the appeal is substantial. In light of the Hall case, Rev. Pinkney's likelihood of success on appeal in this case is extremely high. It is not unusual for criminal appeals to be decided two or more years after a defendant's conviction. If bond pending appeal is not granted in this case, Rev. Pinkney will suffer irreparable harm because he will have served much more than a 93 day sentence.”

Fancher recalled how “The ACLU represented Rev. Pinkney in a successful appeal of an order revoking his probation in People v. Pinkney, 2009…. In that case the Court of Appeals granted Rev. Pinkney's Motion for Bond Pending Appeal. Rev. Pinkney complied with the bond terms imposed in that case and he never became a flight risk.”

Of the five motions filed, only two will be subjected to evidentiary hearings, but the immediate issue during the Fri. Feb. 27 proceedings was the attempt to have the 66-year-old released until a Michigan appeals court makes a decision on the constitutionality of his conviction. There was also a request from Parish to have Pinkney moved to a correctional facility closer to Berrien County so that his family and legal counsel can consult with him on important matters.

Judge Schrock said that it was his preference that Pinkney be moved to a closer location but that it was up to the discretion of the Michigan Department of Corrections (DOC) and that he would not issue an order to such an effect.

People attended the hearing from throughout the state of Michigan as well as Illinois. Representatives were present from numerous organizations including BANCO, the Moratorium NOW! Coalition, National Lawyers Guild, Michigan Welfare Rights Organization, the People's Tribune newspaper, and many others.

After the hearing Pinkney was taken by DOC officers back to prison. A demonstration was later held outside the Berrien County Courthouse demanding the release of Pinkney.

The evidentiary hearing on two of the motions filed is scheduled for April 14. Local and national civil rights and human rights activists are urging people to continue to build support for the BANCO leader.