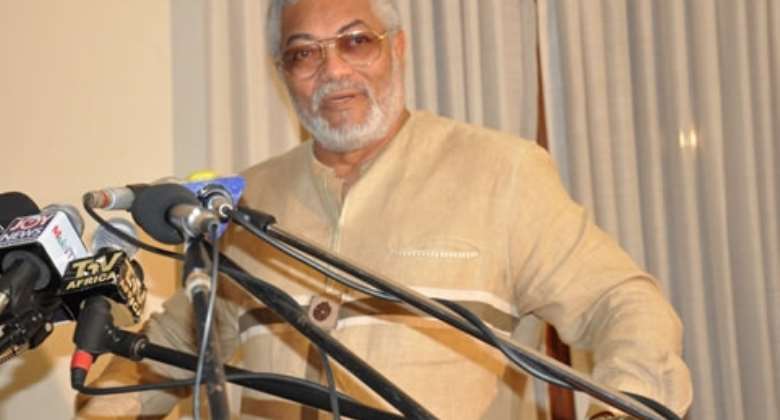 Some corrupt Pastors in Ghana are abusing the name of God, former President Jerry Rawlings has said.

“Look at the corrupt nonsense that is even happening in the name of God: watch those things just to see how far we are degenerating as a people,” Mr Rawlings said when the Association of Nurses and Midwives paid a courtesy call on the former first family.

Mr Rawlings said: “Even characters like Obasanjo of all people, instructed when he was in office that none of these things will be featured on TV unless it could be proven to be scientifically true…otherwise when you show it on TV, you are perpetuating the wrong.

“…Are we crazy as a people?” the former Military leader thundered.

This is not the first time Mr Rawlings has taken a swipe at Pastors for corrupting the word of God for their selfish purposes.

In November last year, he launched a public attack on Bishop Daniel Obinim and Prophet Nicholas Osei, popularly known as 'Kumchacha', for misusing the name of God and exploiting the ignorance of their followers.

According to him, some of the claims often made by Obinim and Kumchacha on TV are not real.

Mr Rawlings at the time asked managers of TV stations and the media to stop giving airtime to Kumchacha, Founder and Leader of the Heaven's Gate Ministries; and Obinim, Founder of the International Gods Way Church, to deceive the public.

Addressing a durbar to crown the 2014 Amu (brown rice) Festival of the chiefs and people of the Avatime Traditional Area at Avatime Gbadzeme in the Volta Region, Rawlings advised TV stations to rather dedicate the time they give to the two men, to promoting Ghana's rich culture, traditions and festivals.

“Many too often as we watch our TVs, I don't think we are putting enough efforts into showcasing some of these cultural traditional festivals – the activities that are going on around the countryside – and yet so much time is spent giving airtime, precious airtime to people like these two prophets I've been talking about of late: the one in Tema, called Obinim and the other one called Kumchacha,” he bemoaned.

He added: “The misuse of God's name is the worst form kind of corruption that we can talk about…and we are paying the serious price for it, and we will continue to do so till we wake to the reality of what is scientifically possible, plausible and doable.”