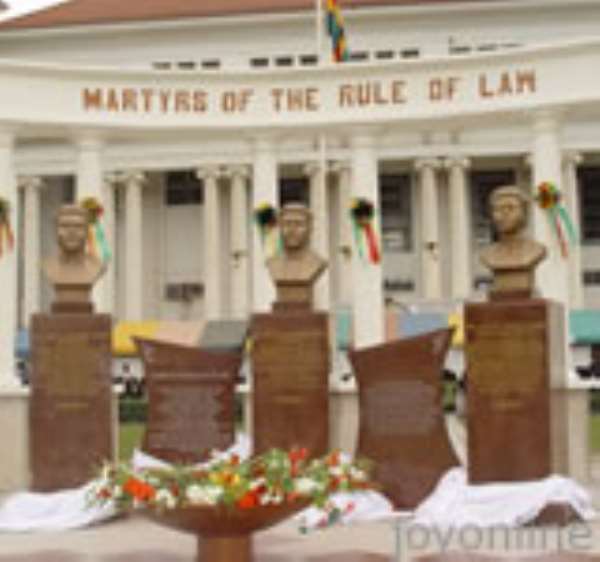 It has emerged from THE INDEPENDENT investigations that, a plot by some unidentified persons to possibly abduct Mr Isaac Opoku Mensah, a lecturer of the University of Education, Winneba, the man who made the recently unveiled busts of the murdered judges has been exposed by the very fact that the hired assassins are finding it difficulty to locate the where about of the intended victim.

The Lecturer is being trailed and sought out by some well built but unknown hired macho men who keep changing cars they are using to carry out their diabolic operation, best described as a desperate man hunt.

Mr Isaac Opoku's (Lecturer in Sculpturing and History of Arts) only crime is that he took up the job of designing and sculpturing the busts of the three murdered High Court Judges, which were unveiled by President Kufuor a month ago and now graces the front of the Supreme Court building in Accra.

The paper's scouts were informed that the number plates of the two vehicles used by Mr Opoku's hunters were on both operation days when spotted, covered with tightly cello taped brown papers to escape public identification.

Consequently, security at the university has been intensified by the police following the two apparent failures of the assassins to identify their victim.

Mr Opoku won the bid to make the busts when the Judicial Service and the Ghana Bar Association placed an advertisement of it in the newspapers.

Meanwhile, Prof Jophus Anamuah Mensah, Vice-Chancellor of the University, has affirmed his full support to ensure that Mr. Opoku is protected.