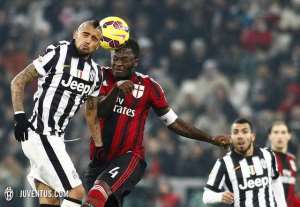 By Akyereko Frimpong Manson
Follow Akyereko on Twitter: @AkyerekOfficial
Italian giants AC Milan have confirmed midfielder Sulley Muntari has recovered from a knock he picked at training last week but will start from the bench against Cesena in their Serie A game on Sunday.

The 30-year-old Ghana international returned to training in mid-week after recovering from a knock he picked while in training a week ago.

But Rossoneri insider Peppe Di Stefano has confirmed though the midfielder has recovered he will not start against Cesena at the Giuseppe Meazza.

“In defense of the situation is difficult. Alex would play with a protective mask in the nose, recovers Muntari in midfield, but will start from bench. If Bonaventure does not fully recover from the shoulder problem, in midfield play Poli, with Montolivo and de Jong,” he said.

Muntari missed Milan's 1-1 draw against Empoli last weekend due to the injury.