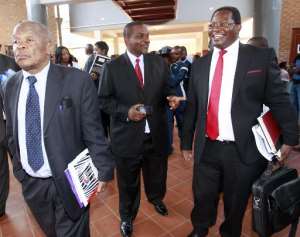 Lusaka (AFP) - Zambia's top prosecutor on Friday stunned a magistrate when he refused to prosecute himself on charges of abuse of office and declared himself a free man.

"I am the director of public prosecution of the republic of Zambia and I have decided to enter a nolle prosequi against all the charges," Mutembo Nchito told the magistrate from the dock, using the Latin term for refusing to pursue a case.

Magistrate Lameck Mwale will rule on March 2 on whether Nchito can prosecute himself or not.

Nchito was briefly arrested last week on nine charges, including abusing his authority, contempt of court and fraudulent contracting of debt. The offences were allegedly committed between 2008 and 2013.

A High Court then cancelled the warrant for his arrest, a ruling that ended the legal proceedings against Nchito.

But former finance minister Newton Ng'uni, who brought the complaint against Nchito, vowed to pursue an appeal.

Fresh summonses were issued this week against Nchito, who is also prosecuting high-profile corruption cases, including those involving former president Rupiah Banda.