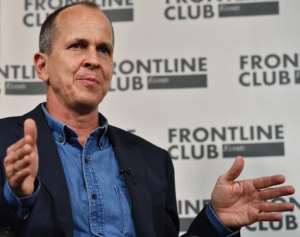 Sydney (AFP) - Freed Australian Al-Jazeera reporter Peter Greste on Thursday called for the international community to continue supporting his colleagues in Egypt, stressing that they were still on trial.

Greste was detained along with two colleagues, Canadian-Egyptian Mohamed Fahmy and Egyptian Baher Mohamed, in December 2013, before he was deported last month after intense diplomatic pressure.

The three journalists were accused of "spreading false news" while covering demonstrations after the army ousted Islamist president Mohamed Morsi in 2013.

They were last year sentenced to between seven and 10 years in jail, but an appeals court in January granted them a retrial, saying the verdict had not been backed by evidence.

Fahmy and Mohamed were freed on bail last month, while Greste is being tried in absentia. An Egyptian court adjourned the retrial last week.

"I would like to remind you that we, all three of us, me included, are still on trial," Greste said during a speech in Canberra.

"We are still very concerned about the future. As I mentioned, the way that this trial seems to be going is encouraging. The court does seem to be taking the process with the degree of seriousness that the first trial didn't.

"But we've also learnt to take nothing for granted, so we need to be very careful about making any assumptions about the judicial process."

The Australian journalist said while Fahmy and Mohamed were encouraged by the amount of support they had received, they also believed their ethnicity and nationality meant they would not attract the same amount of international attention as he did.

"My nationality, my ethnicity played a huge role in the kind of profile that this case got," Greste said.

"Tragically and frankly unfairly, just the way these things work, and they recognise that fundamentally as Egyptians and an Egyptian-Canadian, they're not going to draw the same kind of international attention that my presence in the case did.

"So I really want to underline here to everyone in this audience and to the nation more broadly and everyone around the world that this case is not over, that our trial is ongoing."

The case has been a major embarrassment for Egyptian President Abdel Fattah al-Sisi as he seeks to shore up international support following a widely condemned crackdown on the opposition.

The journalists' initial trial came against the backdrop of strained ties between Egypt and Qatar, where Al-Jazeera is based and which supported ousted president Mohamed Morsi.