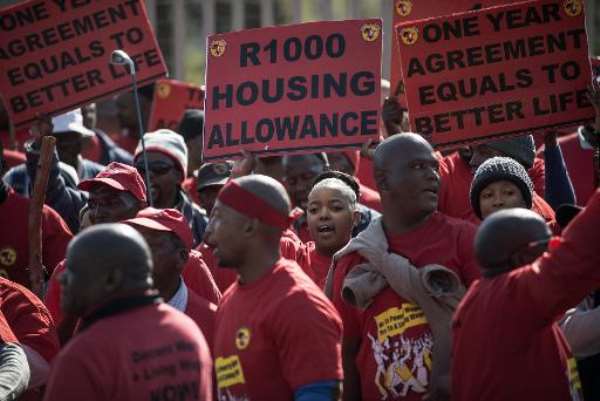 Representatives for the roughly 200,000 workers who downed tools on July 1 rejected a 10 percent pay increase for some employees this year and nine and eight percent increase in 2015 and 2016, the industry federation SEIFSA said.

Chief executive Kaizer Nyatsumba said the multi-year offer was "the very best" firms could do "under these difficult economic circumstances," raising the spectre of protracted negotiations.

The National Union of Metalworkers (NUMSA) -- the country's largest union representing workers across several sectors -- has demanded wage increases of up to 15 percent in a one-year deal.

The strike has hit an estimated 10,500 companies across South Africa worth an aggregate four percent of economic output, and threatens to push the country further toward recession.

The economy shrank in the first quarter amid a five-month-long strike in the country's platinum mines that was only resolved last week.

On Friday there were signs that the engineering and metals strike was being felt beyond the sectors directly affected.

General Motors reported that assembly at its main plant near Port Elizabeth had been halted because of a lack or parts.

"The strike in the metal and engineering sector has impacted upon supply of components to our production line and we have had no other option but to halt assembly as of 3 July 2014," said spokeswoman Gishma Johnson.

NUMSA also came under fire from the government on Friday amid increasing reports that its members have assaulted non-striking workers.

The Solidarity union said it had CCTV footage showing armed people in NUSMA-branded clothing badly beating one of its members.

"Whilst South Africans have the constitutional right to protest, intimidation and violence against those not participating in the strike will not be accepted," said Communications Minister Faith Muthambi.

The government has been criticised by some business owners, who claim the police stood by while striking workers destroyed their property and beat staff who weren't on strike.