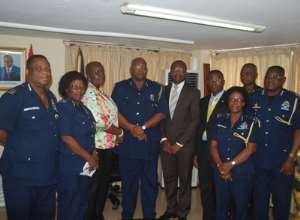 The IGP in a group picture with the GJA president
Affail Monney, President of the Ghana Journalists Association (GJA), has appealed to the Inspector General of Police (IGP), Mohammed Ahmed Alhassan, to   investigate circumstances leading to the molestation of two Joy News staff over the week end by the police personnel who were on duty at the Senchi ferry.

The president, who was accompanied by some executives of the GJA, made the appeal during a meeting with the IGP at the Police Headquarters in Accra yesterday.

Dr. Affail Monney noted that such molestations by some police officers were coming at a time when the police administration was doing its best to foster favourable working relationship with the media.

He recalled that the two Joy News staff, Matilda Wemega and David Macarthy, were filming a documentary at the Senchi ferry area when the police on duty at the time pounced on them, slapping the camera man.

The Inspector General of Police regretted the incident and said they were aware of policy gaps in the service regarding the conduct of personnel in the discharge of their duties, and stressed that the anomaly needed to be rectified to meet with contemporary policing.

He pointed out that the police service was passionate about any act of violence against the media and gave the assurance that everything possible would be done to investigate the matter and bring the offenders to book.

Mr Alhassan recounted instances of media personnel being assaulted by some police officers and the amicable settlements that followed, citing what happened in the Upper East Region, assault on Odi Ahenkan Kwame Yeboah, Black Stars captain Asamoah Gyan's brother's case and also mentioned the misunderstanding between the Public Affairs Department of the service and The Finder newspaper.

DCOP Rose Atinga Bio, Director General of Police Administration, reiterated that the administration would give the case all the seriousness it deserves.

She noted that the police and the media have a lot in common to help strengthen the country's democratic values, adding that they (media) should not allow such occurrences to mar the hard-earned relationships.

Dr. Affail Monney, in an interview with DAILY GUIDE, expressed satisfaction with the outcome of the meeting.

He added that the police and the media would continue to work together to build bridges of peace in the course of the discharge of their duties.