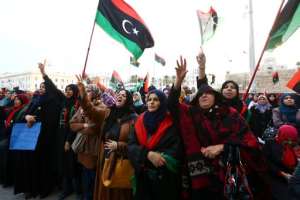 United Nations (United States) (AFP) - Libya's foreign minister urged the UN Security Council on Wednesday to lift an arms embargo to allow the internationally recognized government to fight jihadists, amid growing alarm over the threat from the Islamic State.

"Libya needs a decisive stance from the international community to help us build our national army's capacity and this would come through a lifting of the embargo on weapons so that our army can receive material and weapons so as to deal with this rampant terrorism," the foreign minister said.

Dairi emphasized that he was not seeking an international military intervention, but stressed that there was no time to lose to arm the Libyan army to confront the emboldened extremists.

His appeal came after UN envoy Bernardino Leon said his efforts to broker a deal on forming a unity government able to address the threat from extremists could soon yield results.

"I am hopeful that a political agreement can be reached soon. The differences between the parties are not insurmountable," Leon said.

Egypt was pushing for a UN draft resolution easing restrictions on weapons sales to Libya, but Western diplomats expressed reservations, saying a political deal must be the priority.

There was no draft resolution slated for a vote at the council meeting.

Egypt's foreign ministry said it was proposing a measure that provides for a lifting of the arms embargo that was imposed when Libya descended into violence after the 2011 uprising against Moamer Kadhafi.

But Western powers are wary of committing to an easing of the arms ban in Libya, which is still awash with weapons and where rival militias are battling for control of its cities and oil wealth.

A council diplomat said lifting the arms embargo would be tantamount to pouring fuel on the Libyan fire.

The proposed draft would also call for "increased surveillance from the sea and air to prevent deliveries of weapons to armed militants," the Egyptian foreign ministry said in Cairo.

Libya has two rival governments and parliaments, one recognized by the international community and the other with ties to Islamists.

A US-led coalition is already carrying out air strikes against IS targets in Syria and Iraq, and Egyptian officials have suggested they should be expanded to Libya.

Libya's neighbor Tunisia said it too opposed military intervention, instead calling for a political solution.

That echoed a statement Tuesday by the United States, Britain, France, Germany, Italy and Spain that an ongoing UN effort to get Libya's warring sides to agree on a unity government was the "best hope" for peace.

Libya has descended into chaos since the 2011 revolt, with the internationally recognised government forced to flee to the country's east and militias in control of Tripoli and other main cities.

Some militias have pledged allegiance to IS and one of them released this week a video of the gruesome mass beheadings of 21 Coptic Christians.

"We are dealing with a phenomenon that is now becoming a front, stretching from the Middle East to North Africa, covering the Mediterranean region and the Sahel," the Libyan foreign minister told the council.

"No one in those regions is free from this phenomenon."

The country's main militias, including the Islamist-backed Fajr Libya coalition that has declared a rival government in Tripoli and has been involved in the peace talks, have not linked up with IS.

But Italian Foreign Minister Paolo Gentiloni warned of the threat of such an alliance.

"There is an evident risk of an alliance being forged between local groups and Daesh, and it is a situation that has to be monitored with maximum attention," Gentiloni said, using an Arabic acronym for IS.

The chaos in Libya has also contributed to a dramatic increase in the number of migrants attempting to travel across the Mediterranean from the country to Europe.

Egyptian President Abdel Fattah al-Sisi has said "there is no choice" but to form an international coalition to tackle Libya's militants by force.