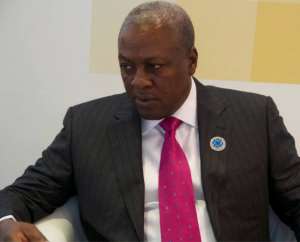 Citizens of Nkroful, the hometown and original burial place of Dr Kwame Nkrumah, Ghana's first president, have made a passionate appeal to President John Mahama to intervene in a protracted impasse between the community and Adamus Resources Limited (ARL), an Australian surface mining company operating in the area.

Whilst the people claim that Nkroful is a historical town which should be preserved for the present and future generations, ARL is said to be carrying out surface mining activities in the area.

Speaking to  DAILY GUIDE  in Sunyani, Peter Aliefeh Tandoh, a concerned citizen of Nkroful, alleged that the mining company had already generated its own Memorandum of Understanding (MoU) without receiving any input from the people of Nkroful.

'Adamus Resources Limited wants to fight tooth and nail to impose its own MoU which did not factor in EPA laws, safety, protection, peace and the fundamental human rights of the people of Nkroful,' he lamented.

Mr. Tandoh said it is based on these concerns that the people are calling on the president to intervene for the land that their forefathers bequeathed to them to be preserved.

The community also called on the Executive Director of the Environmental Protection Agency (EPA) and his outfit to step in to protect Nkroful and its environs.

Nkroful, which is the capital town of the Ellembelle District Assembly, serves as the food basket not only for its catchment area, but also for the people of Jomoro, Evalue and the Nzema East Districts, and by extension, the country.

The historical town is also a potential tourist centre for both Ghanaians and foreigners and for that matter, its heritage must be kept intact, underscored Mr Tandoh.

He noted that 105 years after the birth of Dr Kwame Nkrumah, Nkroful had attained some monumental significance and that its location on the map of Ghana is of great importance.

'No wonder 21 st  September on the Ghanaian calendar has for some time now been declared yearly as Founder's Day. If the hometown of the former first gentleman man of the land who championed the attainment of Ghana's independence would be given out to surface mining, then we don't have a future,' he stressed.

Meanwhile, efforts to contact the authorities of Adamus Resources for their response proved futile.