Open Letter To The Divisional Police Commander Of Effiduase-Ashanti 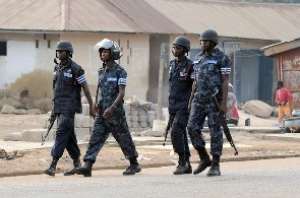 I am publishing this open letter to you following a radio interview you granted to a radio station in Ghana recently. Even though I am in London, I overheard you make bold statements which are unfortunately deemed unprofessional, threatening, and completely an abuse of your powers as a peace officer and a law enforcement agent.

I was really ashamed to hear a whole Divisional Police Commander behave in that unprofessional, if not irresponsible, manner. I do not know if the laws followed by the police in maintaining law and order – prevention of crime, protection of lives and protection of property – in Ghana are different from those prevailing in the civilized Western world. In the UK, there may be minimal abuses of power by the police but those doing that are prosecuted and punished if caught. They are also under the law same as any other ordinary citizen.

However, in Ghana, the police and other security agents with certain powerful individuals inclusive, e.g. Asantehene Otumfuo Osei Tutu II, think they are above the law and can commit crimes with impunity. Please bear in mind that the law is no respecter of persons.

What have the supposedly destooled Kumawu Aduanahene (Nana Sarfo Agyekum II) and Akwamuhene (Nana Baffoe) done to warrant your unprofessional utterances on air? Yes, you can arrest them but you cannot imprison them as you have threatened to. To imprison them is not for you to decide but the courts. It is the sole prerogative of a judge of a competent court of jurisdiction to imprison them if they deserve to, or if they are found culpable. You can only prosecute them, levelling charges against them, but what have they done, Mr Police Commander?

I hope you were not the one who directed one Kyeame Koduah to escort some police personnel to the home of Aduanahene to not only ransack the house, but also, destroy his property in frenzied madness. What are their committed crimes that warranted that disgusting behaviour of the police towards them?

Are you behaving the way you do, consequent upon the letter that the Kumawu Traditional Council wrote to your boss, DCOP Kofi Boakye on 2 December 2014, in which you were copied? I have published the true form copy of the letter on Modernghana (01/01/2015), SpyGhana (01/01/2015) and Ghanaweb, under the title, “Kumawuhene Sends a Manipulative Letter to Police Commander Kofi Boakye - Read it”. You can refer to the web link below to ascertain the veracity of my assertion.

Do not let yourself to be manipulated by Asantehene, Kumawuhemaa and the dubiously enthroned Kumawuhene, Barimah Sarfo Tweneboah Koduah (Dr Yaw Sarfo). Asantehene has no right to impose anyone on Kumawuman as their Omanhene. If you want to know more about this, please read my published research work on the subject in addition to studying both Asanteman and Kumawu histories.

You will yourself be prosecuted one day for breaching the laws of the land if you follow any illegal instigations by the named persons with whom you maintain phone contacts all of the time, to act inappropriately or criminally. Do not be tempted by any inducement of any sort or else, you may land yourself into trouble.

I expect you to behave as a professional Police Commander, upholding the principles and ethics of the police service, but not as a dictator taking the laws into your own hands. The police have nothing doing with chieftaincy issues. They are not to take sides even when the families or factions are fighting themselves, but to impartially intervene in a sensible way to stop the feuding. In the case of Kumawu, the supporters of the two chiefs, Barimah Sarfo Tweneboah Koduah (illegally enstooled by Asantehene) and Barimah Tweneboah Koduah V, the masses' choice, are not fighting, but at peace. Why then should you take sides with Dr Yaw Sarfo (Barimah Sarfo Tweneboah Koduah), being at his beck and call, to seek to terrorise Barimah Tweneboah Koduah V and his supporters?

Are there not two chiefs in Tuoabodom in the Brong-Ahafo region? Were there not two chiefs in Accra until the demise of Ga Mantse, Nii Tackie Tawiah III? Are, or were, any of the chiefs with their supporters harassed the way you are criminally harassing Barimah Tweneboah Koduah V? Check him on YouTube under “Barima Tweneboa Koduah V” to see how the Kumawuman masses are supportive of him as their only acceptable chief of matrilineal descent to Barimah Tweneboah Koduah I, the originator of the Kumawu Koduah Stool.

I shall be in the studio of Sources radio (FM) UK today, Tuesday 17 February 2015 at 16:00 and probably on Wednesday 18 February 2015 at the same time to grant interviews to DJ Sources on Kumawu stool dispute. I shall seize the opportunity to discuss you and how the police are acting unprofessionally with regards to the Kumawu issue. You may have the opportunity to listen to me live on either your laptop or desktop by keying in www.sourcesradio.tv and on your Android phones, Tablet, IPAD or iPhone on Google play store.