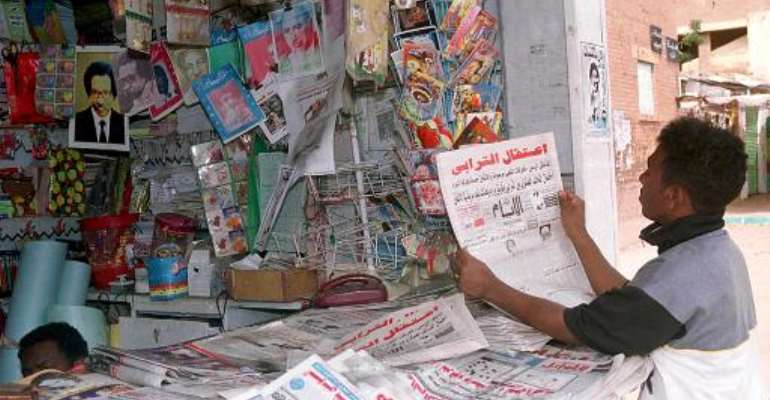 Sudanese security forces have seized the print runs of 10 newspapers and suspended the publishing licences of four of them in a major media crackdown. By Salah Omar (AFP/File)

Khartoum (AFP) - Sudanese security forces seized the Monday print runs of 10 newspapers and suspended the publishing licences of four of them in a major media crackdown, editors and NGOs said.

National Intelligence and Security Service (NISS) officers often confiscate newspapers over articles they deem inappropriate, but it is rare for them to seize so many at once.

"The security apparatus seized the editions of nine different newspapers on Monday" without saying why, the Journalists for Human Rights Sudan (JHR) NGO said in a statement.

Afterwards, NISS agents called the editors of four papers to tell them their publishing licences had been suspended.

"The security and intelligence apparatus told us by phone that al-Khartoum newspaper and three others -- al-Jarida, Akhir Lahza and al-Intibaha -- were all suspended for an unspecified time," said Al-Bagir Ahmed Abdallah, al-Khartoum's chief editor.

Abdullah was told his paper had been suspended over a story about a consumer rights forum where one speaker discussed "the sexual abuse of school- and nursery- children on the buses that transport them," he said, adding that the decision to seize the papers had come from the head of NISS.

The chief editors of pro-government daily Akhir Lahza and independent al-Jarida confirmed NISS had called to say their publishing licences were suspended but had not given reasons.

Al-Intibaha's managing editor also said he had been notified of his paper's suspension.

The General Journalists' Union criticised the confiscations in a statement, "pointing to their negative impact on the situation of press freedoms in Sudan".

The Union said it would raise the confiscations with the presidency, information ministry and NISS.

Journalists in Sudan complain of pressure and harassment from the security services, and the country regularly ranks towards the bottom of press freedom indexes.

In February, before nationwide elections that President Omar al-Bashir won with more than 94 percent of the vote, NISS seized the print runs of 14 papers in one of the most sweeping crackdowns in years.

Rights groups accused Bashir's government of trying to stifle the media and civil society ahead of the presidential and parliamentary elections, but NISS agents have also seized newspapers since the April 16 votes.