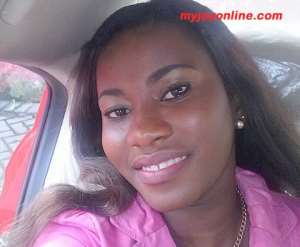 Two Multimedia journalists, JoyNews Reporter Matilda Wemegah and Cameraman David MacCarthy have been assaulted after they tried to film a scuffle between the policeman and a trailer driver on the Senchi ferry in the Eastern Region.

According to Matilda, she along with two other staff members had gone to the Asougyaman district to do one of their usual community reports.

After they got clearance from the ferry operators to join the Senchi ferry, she said, she noticed that a policeman had arrested a trailer driver. The cause of the arrest was not immediately established.

She described what ensued between the two as “quite a violent thing” and so “I signalled my cameraman to start filming”.

But the policeman immediately abandoned the arrest when he saw the camera technician filming the Saturday scuffle.

“They just jumped on him trying to take the camera from him by so doing during the struggle one of the policeman just slapped him”, an eyewitness told Joy News.

Matilda was shoved aside by as she attempted to intervene.

“I could have fallen off the ferry into the Volta river”, Matilda continued.

But the policeman was not finished with David when the ferry arrived at the other side.

Matilda said the policeman “dragged him out, tore his belt” and while on the ground, a policeman unrelated to the incident, rushed out of his tent and slapped David, knocking him to the ground.

“He just rushed on the cameraman and slapped him”, a shocked Matilda said.

Deputy Eastern Regional Police Commander James Abass-Abaah told Joy News, his outfit is yet to receive a report from the policemen on the site.

Nonetheless, investigations could commence as soon as Monday.

He explained that the ferry was marked as a “security zone” and the journalists should first have sought clearance before doing any work.

The incident does little to dispel fears among journalist that their rights are not respected by the police and some sections of Ghana's professional workforce.