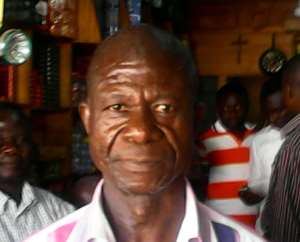 The Kejetia traders association in Kumasi have described the reconstruction of kejetia bus terminal into stores as useless and have no prior benefit to the country in the future.

According to them, the reconstruction of the bus terminal and the inclusion of its many stores will go a long way to make the place more congested in the near further. They said, the KMA intention to rebuild the bus terminal to accommodate many stores, is part of its stragety to make lot of money into its revenue coffers, but not the interest of the nation and Kumasi.

The angry traders expressed their disregard when speaking in an interview with modern Ghana, after KMA announced the reconstruction of Kejetia bus terminal and Kumasi central market at a press conference held thursday with the mayor, Hon. Kojo Bonsu in Kumasi.

The mayor addressing the press said, the project would be executed in three phases which will start from Kejetia bus terminal as phase one, that will last between twenty four to thirty months whiles phase two will commence after the completion first phase and these would take place at the Kumasi central market.

Kojo Bonsu said, the traders and the transport operators at kejetia would be relocate to alternative markets shops for free, without paying for the occupy places allotted for them.

According to him, a company has been employ to do registration of the traders to capture the right owners of the shops. To this he said, biometric registration would be carried out with bio-data to store on a data base system that cannot be altered.

He assured the traders upon completion, they would be given the first option for the stores before any other consideration. "Legal owners of the buildings that would be affected would be compensated, the process are being pursued to have a holistic valuation of all such properties". He added.

But speaking in an interview with modernghana, the chairman of kejetia traders association Mr. Kwabena Obeng said, the move of KMA is not what will help them in anyway. He said, the KMA has Jo lay out plane as how the bus terminal will be rebuild.

He stressed that though, the mayor has met the executives of the association to discuss issues but could show them the plan of the Kejetia that is said to commence soon. "The only plan he showed us was that of the central market". He stated.

He said, reconstruction of the terminal to build more stores will bring rather congestion at the facility. Mr. Obeng noted that, the available space now at the place is already limited, therefore building more stores will gear the congestion.

He disagreed with the mayor that, the relocation them to the new stores are free. According to him, upon investigation about the said stores that they will occupy reveals that, they will pay some amount, adding that, Kojo Bonsu want use strategy to get them out of the place.

The angry traders said, they will not sit for this to happen. The chairman suggests since the KMA have in hand the layout of the central market, "it will be good to start the project from there".

He said, "the KMA given us only two months notice is annoying part of it all, we the traders don't buy this idea since we know is for personal gain."

The chairman caution the mayor to sit and and carefully plan well for the said reconstruction of the buss terminal to prevent chaos in the future.