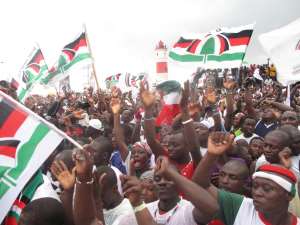 The foot soldiers reportedly stormed the premises of the directorate with life-threatening objects, including horse whips, on hearing that there was going to be a handing over to a new administrator.

Staff at the directorate purportedly locked themselves up in their various offices for safety as the party hoodlums took over the main yard chanting   war songs and threatening to visit mayhem on anyone who were opposed to their conduct.

The explanation of their conduct was that their preferred candidate had not been appointed as substantive regional director among the seven persons who expressed interest in the position – which went through due process.

The ceremony had to be called off on the orders of the Northern Regional Minister, Alhaji Mohammed Muniru Limuna, for reasons yet to be made public, with the incoming and outgoing regional directors expressing disappointment over the conduct of the NDC supporters.

According to information gathered by DAILY GUIDE , prior to the retirement of Dr. Akwasi Twumasi in September last year, the Public Services Commission (PSC) was tasked to find a competent replacement to run the affairs of the health service in the region.

Seven persons, including Dr. Kofi Issah and Dr. Jacob Mahama – current Deputy Northern Regional Director in-charge of Public Health, were shortlisted to go through the processes in order to settle on the most competent person.

Dr Agyemang Mensah
After the entire processes by the PSC, Dr. Kofi Issah was considered for the job and communicated to in a letter dated January 30, 2015, with reference number AC/ 22/184/01A signed by one Michael Owusu-Nimako, secretary to the commission.

The introductory paragraph stated that the appointment was authorized by President John Dramani Mahama in consultation with the PSC and advice of the governing council of the Ghana Health Service (GHS) which was to take immediate effect.

The Director-General of the GHS, Dr. Ebenezer Appiah-Denkyira, in a signed letter dated February 6, 2015, reference number GHS /DGS/N.1, duly informed the Northern Regional Minister about the appointment of Dr. Kofi Issah to the region and appealed to his (minister's) outfit to accord him (Issah) the necessary courtesies.

A copy of a second letter from the Director-General sighted by DAILY GUIDE with reference number GHS/HRD/CD/C18, dated February 6, 2015, also informed the Brong-Ahafo Regional Director of the GHS under who Dr. Kofi Issah works.

From the various correspondences, a handing-over ceremony was scheduled for February 9, 2015, at the regional health directorate to enable Dr. Akwasi Twumasi proceed on his mandatory retirement for acting since September last year.

It was however, rescheduled to Thursday, February 11, 2014, due to some administrative hiccups but this was never to be as NDC foot soldiers reportedly hijacked the event, claiming it would be over their dead bodies for Dr. Issah to become the regional director.

It took the timely intervention of armed police and military personnel to restore calm at the directorate, while management duly communicated what was happening to the Director-General of the Ghana Health Service.

In a dramatic twist, the Minister of Health, Dr. Kwaku Agyemang-Mensah, in a letter dated February 10, 2015, asked that Dr. Kofi Issah rather  take over from Dr. Koku Awoonor-Williams as Upper East Regional Director of the Ghana Health Service.

Dr. Koku Awoonor-Williams has been reassigned as director at the Ministry of Health and Dr. Jacob Mahama asked to take over the Northern Regional directorate as the acting regional director – a decision that is believed to be linked to the protest by the foot soldiers.

Some prominent residents have condemned the act of the NDC foot soldiers, noting that the appointment of directors is purely an administrative matter which has no links with politics.