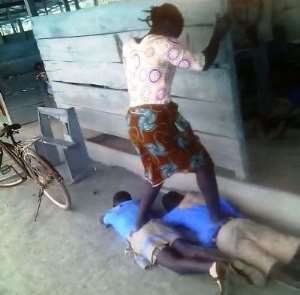 Wassa Akropong Magistrate Court has sentenced the brutish English teacher, Christiana Owusu to a fine of GH¢2000 or one year in imprisonment.

This was after the teacher was found guilty of assaulting two class four pupils of Multi-Educational Centre at Wassa Saah in the Western region.

Christiana Owusu was captured in a video stamping on the pupils for not doing their homework. After the video went viral, courtesy of Adomonline.com, police in Wassa Saah arrested her.

Regional correspondent, Asonaba Banasco who was in court reported that the distraught teacher cried uncontrollably while in court.

She pleaded guilty to the charge of assault and pleaded for forgiveness, claiming she has no idea what came over her.

He said after the judge received the medical report of the victims which indicated that they did not suffer any injuries, he fined Ms. Owusu GH¢ 2000. The teacher however still risks going to jail if she fails to pay the amount to the court. Story by Ghana | Adomonline.com| Adwoa Gyasiwaa | [email protected]