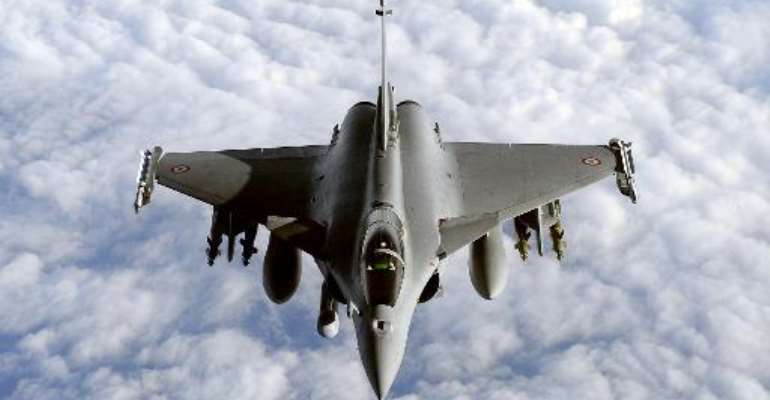 France announces it will sell 24 Rafale fighters, like the jet pictured here, plus a frigate to Egypt in a 5 billion euro deal. By Gerard Julien (AFP/File)

Paris (AFP) - France announced Thursday it will sell 24 Rafale fighters plus a frigate to Egypt in a 5 billion euro ($5.7 billion) deal that marks the first foreign contract for the multi-role combat jet.

"The Rafale fighter jet has won its first export contract," French President Francois Hollande said in a statement issued by his office.

"The signing will take place in Cairo on February 16. I have asked the defence minister, Jean-Yves Le Drian, to sign on behalf of France," he added.

The military hardware would "allow Egypt to increase its security and assume its full role in the service of regional stability," Hollande said.

The Rafale jets are built by French manufacturer Dassault Aviation and have been used by the French air force in Libya and Mali.

Landing the contract will come as a relief to Dassault Aviation, which had yet to land a single foreign sale after nearly three decades of development that cost tens of billions of euros.

Dassault Aviation has been locked in negotiations to sell 126 Rafale jets to India since 2012, without making much progress.

In another setback, France in 2013 failed to convince Brazil to buy its Rafale jets, losing out to Sweden's Saab in a multi-billion dollar contract.

The French government initially agreed to buy 11 Rafales a year for its air force to help the programme. But in a bid to curb public spending it has since moved to scale back the number to only 26 planes in the next six years.