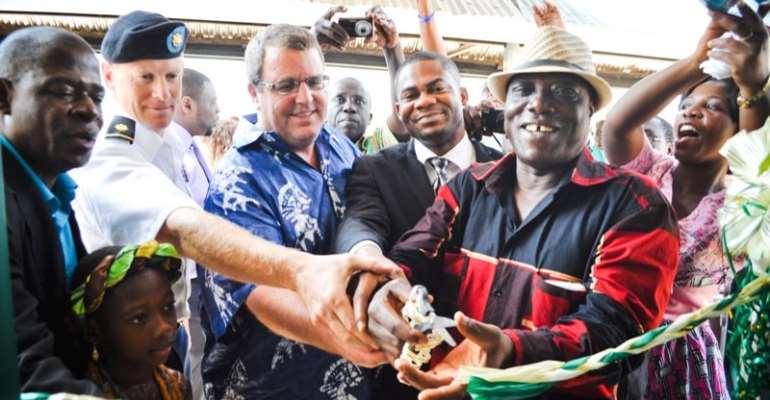 Accra, Feb. 11, GNA - A ribbon-cutting ceremony has taken place for the inauguration of a Nutrition Rehabilitation Centre for Nkwanta South in the Volta Region.

The ceremony was attended by village chiefs, community members, national, and international dignitaries.

A news release signed by Zainab Mahama, Press AttachÃ© at the   United States (US) Embassy in Accra and copied to the Ghana News Agency (GNA) said the construction of the Centre was a humanitarian aid project led by the U.S. Department of Defense, and that the US Government contributed a total of $639,700 towards the project.

'The Nutrition Rehabilitation Centre (NRC) grew from the grassroots development initiative of a Peace Corps Volunteer who worked with both USAID/Ghana and the U.S. Office of Security Cooperation/ Humanitarian Assistance Africa Command (AFRICOM) to bring the vision to life', the release stated.

It said the AFRICOM, with oversight by the US Army Corps of Engineers (USACE), contributed two-thirds of the funding for the project, while USAID/Ghana provided the final third with additional support in training programmes and medical supplies, it added.

The centre which the USAID/Ghana Deputy Mission Director Andy Karas referred to as 'a hub of hope', is the first of its kind in the Region and in Ghana as a whole, and will play a critical role in the planned prevention of malnourishment for children under the age of five years.

According to the release, a total of 27 per cent of all children in the Region suffered from stunted growth due to malnourishment, which has been proven to cause cognitive delays and poor school performance, and that 79 per cent of children in the area were anaemic.

'The NRC will be a critical addition to the community, given the high levels of poor nutrition in the Volta region', it said, adding that themes including partnership and hope resonated across all of the speakers' remarks.

Major Mark McEvers, Bilateral Affairs Officer for Ghana, Togo, and Benin, who represented AFRICOM, stressed the need to build the capacity of Nkwanta and the Volta Region to treat malnourishment for the most vulnerable of the population - children below the age of five.

The building also utilizes a 100 cubic meter rainwater-harvesting cistern for rain collection from the roof of the main building.

USAID/Ghana contributed a number of resources to the project including beds, linens, cold chain equipment, medical supplies, and stationary.

'Within the next three months, USAID will deliver therapeutic milk and biscuits, scales and height boards, as well as Ready-to-Use Therapeutic Food.   USAID plans to continue working with Nkwanta North and South through the USAID/Systems for Health project to end preventable child and maternal death over the next five years'.

It is expected that the Systems for Health project will work with the District Authorities and District Health Management Team to assess how to best build a system for effective referrals to the Nkwanta nutritional rehabilitation centre through the successful Community-based Health Planning and Services (CHPS) initiative, the release further stated.