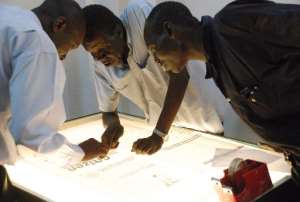 Rights groups have repeatedly warned that security forces have cracked down on journalists, suffocating debate on how to end a civil war in which tens of thousands have been killed in the past 14 months.

Last month five journalists working for state-run media were killed in an ambush in the remote western region of Bahr al Ghazal, along with six other people.

Unknown gunmen carried out the killings, but the government's security service has also cracked down on reporters in the capital Juba.

The Nation Mirror newspaper was shut down by security agents on February 3, with editor Wol Deng Atak telling the CPJ the paper was barred from publishing indefinitely because it printed "anti-government articles."

The newspaper had sparked anger after a headline mistakenly claimed government troops had withdrawn from the northern area of Renk, for which the paper issued an apology and clarified in the next issue.

US ambassador Charles Twining has criticised the closure, and said he was "alarmed at recent reports of the intimidation and harassment of journalists in South Sudan by elements within the government."

In January, security forces threatened to shut the Juba Monitor, forcing the daily newspaper to sack a columnist who said ethnic divisions were fueling the war.

"The security services conduct these operations without recourse to South Sudanese law," the CPJ said.

In a separate incident, Nation Mirror reporter Athiang John was badly beaten by crowds on January 20 in Juba after trying to investigate a recent attack.

"We call on authorities to allow the Nation Mirror to resume publishing immediately, and to allow independent media to freely report the news without fear of censorship or retaliation," the CPJ's Tom Rhodes said.

There was no immediate response from the information ministry.