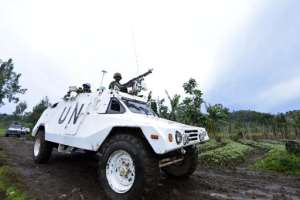 The UN's 20,000-strong MONUSCO force had been working with Congo's army on a plan of attack to drive out the Democratic Forces for the Liberation of Rwanda (FDLR) from the east after more than two decades.

The planned joint offensive however hit a wall when UN officials demanded that two generals accused of human rights violations be replaced as a condition for supporting the military action.

"The UN mission in the DRC has raised concerns linking two FARDC generals to human rights violations, and therefore we have paused our support to FARDC on anti-FDLR operations," a UN official told AFP.

"We intend to fully support the FDLR operations as soon as the outstanding issues regarding command of the operations are resolved," said the official, who asked not to be named.

"For us, we would only replace someone in the (army high) command if that person had been convicted by our military courts. Yet, no such thing has happened," government spokesman Lambert Mende told a press conference in Kinshasa.

UN officials gave Kinshasa until February 13 to sack the two generals or forefeit MONUSCO's support for the operation.

But Mende shrugged off the threat, saying that two generals had "always worked with the United Nations" and would remain in charge of the offensive.

"It's a sovereign decision," Mende said, declaring that DR Congo was "not under anyone's supervision".

UN officials said they remained in contact with Kinshasa and were confident that a solution would be found.

The UN move was limited to the planned operation against the FDLR and did not affect other military campaigns against the many rebel groups that roam the eastern DR Congo.

Some leaders in the FDLR took part in the 1994 genocide in Rwanda before crossing over into eastern DR Congo.

The DRC armed forces, known as the FARDC, announced on January 29 that they were launching the offensive against the Hutu rebels, but UN officials say there has been no action on the ground.

The United Nations is pushing for the disarming of dozens of rebel and splinter groups after two decades of conflict in the eastern DR Congo, much of it fueled by the lucrative trade in minerals.