The Villification Of J.B. Danquah Continues 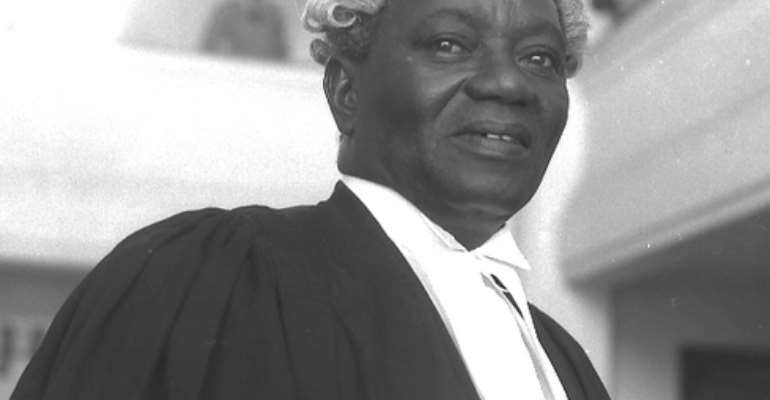 The vilification of Danquah continues amidst deafening silence from his family and party.
It is important for Danquah's family, the NPP Presidential candidate and the NPP to defend Danquah against false accusations because credibility matters in politics. We cannot go to Ghanaians and ask them to trust us as patriots when our founder is considered a traitor to his country. Those of us who believe in his greatness need to know that Danquah was NOT a BENEDICT ARNOLD.

As Professor Larry Gibson told me repeatedly, “Your big men have opinions without data.”

In line with this, facts ought to be sacred in this debate. While we must vigorously defend Danquah against false accusations, we must also guard against the temptation to give him false credit. Giving him credit for Akosombo Dam, Legon, Bank of Ghana and other such things strains credulity and undermines his legitimate achievements. He did enough that he, his family and his party can be justifiably proud of, without exaggeration.

Today, on Ghanaweb, Paul Amuna published an article containing excerpts from NKRUMAH'S 1963 book, “AFRICA MUST UNITE”, in an effort to justify the imposition of Preventive Detention and the crushing of the opposition in the newly independent Ghana. While I must credit Mr. Amuna for looking for facts, his article made depressing reading. To describe how Ghana's unity was destroyed under the title “AFRICA MUST UNITE” is Orwellian.

It reminds me of 1984 and big brother. The fact is that while Nkrumah deserves to be celebrated for a lot of things, PDA is not one of those things. “AFRICA MUST UNITE” harmed Africa. Nkrumah's account of how he had crushed the opposition inspired every one of Africa's first generation dictators to be intolerant of opposition and caused many of our democratic problems.

Also writing today on Ghanaweb, the NDC's Ametor-Quarmyne, attempts to justify PDA, Danquah's imprisonment and the traitor charge. He justifies the PDA (passed in 1958 and NOT after 1960 as he claimed), by claiming that the opposition was making Ghana ungovernable and that there were numerous attempts on Nkrumah's life. Indeed, his epistle is titled “THE CANONIZATION OF A TRAITOR”, which is itself highly prejudicial. In my view, it is wrong for anyone to attempt to assassinate anyone, let alone the President. However, we should acknowledge that it was not only members of the UP tradition who were accused of plotting assassination attempts. In the end, even leaders of the CPP, including Crabbe, Adamafio and Ako Adjei, were accused of plotting assassinations. While deploring assassinations, we must ask what about Nkrumah made all these people who were so loyal to him initially, in the end, his enemies. Was there something in him?

Were some of them innocent as the court found? After justifying Danquah's detention, Ametor-Quarme attempts to justify the traitor charge against Danquah. It appears the main basis of that charge is the 352-page, 1983 book by Richard Mahoney titled “JFK: ORDEAL IN AFRICA”, which discusses Kennedy's foreign policy challenges in Africa. The paragraphs regarding Danquah have been given undue weight due to the fact that the US Ambassador at the time of the said events was Mahoney. Actually, the author was NOT the ambassador. He was the son of the Ambassador, William P. Mahoney Jr., who served in Ghana from 1962 to 1965, when the author was about ten.

There is no mention in the book about any sum being paid to Danquah. There is no record of either the CIA station chief or CIA Director ever confirming that the CIA ever paid any money to Danquah or that he was a spy. Added to that is the fact that Danquah was never in a position to provide any state secrets to anybody. In other words, there is no iota of evidence backing the charge that Danquah was a CIA agent.

Consistent with this campaign of vilification, last week, Prof. Akosah claimed that Danquah was arrested with a copy of a speech he planned to deliver if Ametewe had killed Nkrumah. I challenged him to release a copy of the speech and I am still waiting. That speech does not exist because it was NEVER written.

Even though Ms. Samia Nkrumah claimed Nkrumah had done nothing wrong, others in the CPP camp claimed Nkrumah planned to release Danquah the day after he died and that he, Nkrumah wept upon hearing of Danquah's death. If he did nothing wrong, why was he weeping? Where are the orders he was going to sign for Danquah's release? The news that he regretted Danquah's death, if confirmed, will fully restore Nkrumah as a humane leader in my view.

It is important that we know the truth about Danquah and his role in Ghana's history. Therefore, I urge the Danquah family to use every available means at their disposal to clear his name of the traitor and treason charges. The options available include going to court, to the media commission and requesting the US embassy or other branches of the US government to make available for public examination, all the records. The NPP cannot have as one of its founders, a man who may be a traitor.

Finally, while we must get to the truth in the matter of Danquah;s life and death, we must do so with respect and sensitivity for all concerned.