Kufuor & Some Ministers Are Corrupt 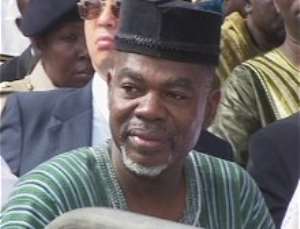 ...80 ministers - Each having 2-3 Cars ... Gov't Mobile Phones For Ministers' Girlfriends The presidential candidate of the People's National Convention (PNC), Dr. Edward Mahama, has stated that President Kufuor and some of his ministers of state are corrupt and must be voted out of power. He said after selling Ghana to both the International Monetary Fund (IMF) and the World Bank through the acceptance of the HIPC initiative and also declaring Zero Tolerance for Corruption, President Kufuor went ahead to use state resources to renovate his private house, which has now been named as HIPC Junction by people in Accra Mahama said in attempt to defend what appeared to be indefensible, President Kufuor's ministers were moving from one radio station to another in Accra trying to explain that the house was renovated from state resources for security reasons. "If the President's private residence was renovated with state resources to provide him with adequate security, then why did not they use the money to renovate the Castle or the Flagstaff House which are owned by the state for our President to stay in?" He asked. Dr. Mahama, who was addressing party supporters at Beposo in the Shama Constituency last Wednesday, said the British government left Ghana a whopping amount of $400 million but ex-President Nkrumah never used a penny of it for his private gains. Dr. Nkrumah, he continued, used the money to carry out development projects, including the construction of Akosombo dam and the Tema Motor way, adding Nkrumah never put up a house before he was overthrown with the help of the CIA. Dr. Edward Mahama regretted that today after declaring Ghana as a HIPC country, our president had gone ahead to appoint as many as 80 ministers who had been provided with two or three cars including Pajeros that cost about $60,000 each. He said all the ministers had also been provided with mobile phones with some even giving it to their girl friends. He called on Ghanaians to multiple $60,000 by 80 and also cost the mobile phones to know the huge amount being wasted by our government on luxuries instead of channeling them to development projects that would benefit all the people in the country. The PNC leader further told the party supporters that in a country like America which had even powerful economy that ours, all ministers of state are staying in their private houses but here in Ghana, a country that had been declared as HIPC, some of the ministers in President Kufuor's government had track record of rejecting their bungalows and sometimes calling for its expensive renovations. He said looking at the expensive cars being bought by the government, expensive renovations of their bungalows and the buying of mobile phones for ministers, it was very difficult for one to admit that Ghana was indeed a HIPC country. He therefore called on the electorate to dump both NPP and NDC whose founder; ex-President Rawlings was now riding in expensive cars after leading the country for 19 years and instead vote for PNC that had a vision for this country. He said all the leaders that had led the country after Nkrumah were yet to diagnose problems confronting the country and solving them. He promised that his government would provide free education from primary level up to SSS level and also provide subsidies on fishing and farming inputs. According to him, he would do this by cutting down the current number of 80 ministers to 30 and use the money that would have gone into their $60,000 Landcruisers and the running of their offices including the free mobile phones to provide the free education. Mahama also promised to open up dialogue with both IMF and the World Band and prevail upon them to audit the $8billion external debt Ghana owed to ascertain if all the loans indeed came down to Ghana. He was hopeful that if this audit was carried out, the truth would be established that about 40% of the loans contracted by our leaders did not come to Ghana and that it was either embezzled or misappropriated by officials of the IMF or our government. The presidential hopeful also said to give a real meaning to Zero Tolerance for Corruption, his government would separate the position of Director of Public Prosecutions from the Office of the Attorney General and Ministry of Justice to enable him have the power to prosecute ministers who would be caught in the corruption web. He said even though the President claimed to have set up an office of accountability at the castle, up to date the said office had unearthed nothing because there was no way the office could prosecute its own ministers. Mahama also promised that his government would introduce a Bill of Conflict of Interest to check government officials who form companies under different names to bid for government contracts.