By Jay Deshmukh and Abdelhalim Abdallah 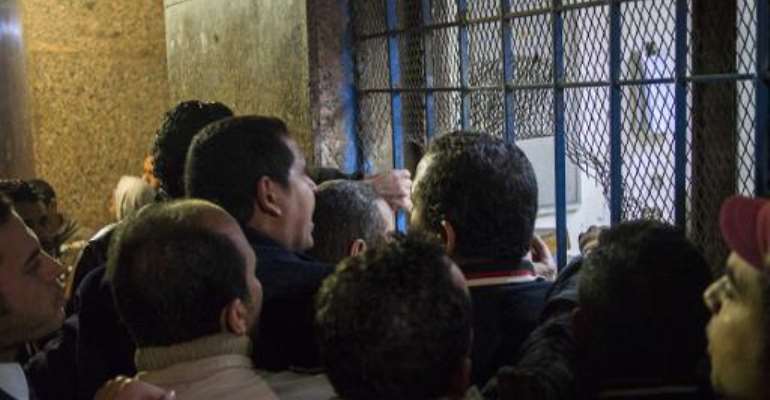 Bereaved friends and family gather at the Zynhom morgue to check for the names of people killed at a football stadium in Cairo on February 8, 2015. By Hamada Elrasam (AFP)

Egypt's hard-core football fans have been repeatedly involved in the country's explosive political mix and Sunday's violence showed once again the willingness of police to use force.

The radical fans of one of the clubs involved in Sunday's match, Cairo-based Zamalek SC, accused the authorities of carrying out a "planned massacre".

The Ultras White Knights, who have been at the forefront of previous anti-government protests, said on their Facebook page that most of the victims had been trapped inside a metal enclosure that was only set up at the grounds the day before the match.

The violence -- reminiscent of clashes that killed more than 70 people after a football match in Port Said in 2012 -- erupted as thousands of fans tried to force their way into a Cairo stadium to watch a game, triggering panic as police fired tear gas and birdshot at the crowd.

Health officials and police said all the victims, mostly youngsters, were crushed in a stampede.

He said that 22 policemen were also injured in the clashes and 18 people were arrested.

"The deaths were caused due to a stampede. There are no signs of gunshot or birdshot," senior health official Khaled al-Khatib said.

"The victims had lots of bruises, while some had broken necks... People were trampling each other."

At least 25 others were injured, the health ministry said.

President Abdel Fattah al-Sisi ordered an investigation "to uncover the root causes" of the violence, his office said.

Television footage showed crowds of fans squeezed inside the narrow metal enclosure, jostling to get inside the stadium to watch Zamalek play another Cairo-based club, Enppi SC.

"One fan set off a flare as he waited in the queue, which caused the police to fire tear gas at the crowd that was squeezed in a narrow pathway leading to the gate," said a witness who gave his name as Ibrahim.

"The tear gas caused suffocation and led to the stampede."

Fans were further outraged as the match continued despite the unrest.

The clashes prompted the government to suspend the Egyptian Premier League indefinitely.

What happened on Sunday was a "disaster for Egyptian sport", said Khaled al-Mortagy, a former board member of the Al-Ahly club.

"Matches are being played behind closed doors. This is leading fans to be against the police. It's becoming a culture. If you can't secure a match, how can you secure the country?"

The 2012 Port Said riots erupted after a match between the Al-Ahly and Al-Masry clubs.

Sunday's match had been open to the public, unlike most other games between Egyptian clubs since the Port Said riots, the country's worst-ever sport disaster.

The interior ministry had restricted to 10,000 the number of spectators allowed into the stadium on Sunday.

Thousands of fans without tickets scaled the stadium walls before police dispersed them, officials said.

"Tension could rise further if the government decides... to re-impose a ban on spectators attending soccer matches," said James Dorsey, an expert on Middle East soccer at the Singapore-based S. Rajaratnam School of International Studies.

The incident also dashed hopes that Sisi's government "may adopt a less brutal approach to its civil society opponents," he said.

More than 1,400 people have died in a government crackdown targeting supporters of president Mohamed Morsi since he was ousted by then army chief Sisi in July 2013.

Sunday's deaths could inflame football fans, who have repeatedly clashed with police in recent years and can bring thousands to the streets.