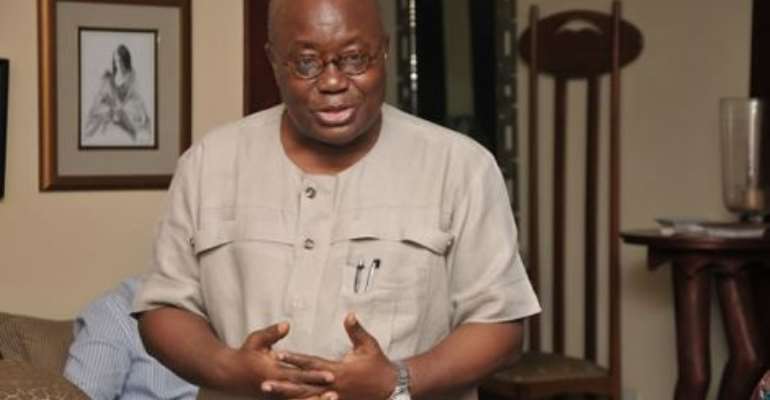 After making spurious allegations against the flagbearer of the New Patriotic Party (NPP), Nana Addo Dankwa Akufo-Addo, editors of pro-NDC newspapers, Daily Post , Ghanaian Lens, The Enquirer, Informer and The Al Hajj - the latter edited by Alhaji Bature Iddrisu – could not muster the courage to defend themselves.

This was when the NPP flagbearer dragged the newspapers to the National Media Commission (NMC), an agency mandated by the 1992 Constitution to register, regulate and monitor the Ghanaian media, over attempts to link him to narcotic drugs. The smear campaign followed the arrest of one David Kwadwo Anim, owner of Le Baron Hotel in Accra, over alleged drug trafficking.

All the five papers in a syndicated story with various headlines tried desperately to link Nana Akufo-Addo to narcotic drugs but could not come forward to defend the stories, leading to the NMC ordering them to retract and apologise to the NPP presidential candidate.

The Daily Post published the story on its Monday, 9th June, 2014 pages 1,3 and 14 headlined, 'AKUFO-ADDO BUSTED AT LAST - he attended nocturnal meeting with drug barons to raise funds for his 2012 campaign in the hotel of the drug baron he claims he does not know.'

There was another publication from the same Daily Post in its Wednesday, 11th June, 2014 edition - pages 1, 3 and 14 - headlined, 'AKUFO-ADDO GOES DEAF, BLIND AND DUMB … over publications of his fundraising meeting with drug barons at the Le Baron Hotel in January, 2012.'

The Ghanaian Lens also wrote in its Monday, June 9, 2014 edition - pages 1, 2 and 3 - a story under the headline, 'AKUFO-ADDO'S LINKS WITH DRUG BARONS CONFIRMED,' whiles the Enquirer on Monday, 9th June, 2014 - pages 1 and 4 - wrote a story under the headline, 'After Ken Agyapong's Revelation on Radio ARRESTED DRUG BARON MET NANA ADDO IN 2012… To Plan How to Finance Presidential Campaign.'

The rest include The Informer, which carried in its Monday, June 9; Tuesday, June 10, 2014 issues - pages 1 and 4 - a story headlined, 'Explosive Evidence Reveals … AKUFO-ADDO LIES ABOUT HIS ASSOCIATION With Arrested Drug Dealer,' with The Al-Hajj also coming out with another one on Tuesday, 10th June, 2014 - pages 1, 2 and 3 - headlined, 'Cocaine: Le Baron Owner Begins Singing: NPP MEN FACE EXTRADICTION.'

All these compelled lawyers for Akufo-Addo, led by Godfred Yeboah Dame, to file a complaint at the NMC as they considered the stories 'offensive and derogatory' and that the 'substance of the stories complained of are in all essentials utterly false, a product of the imagination of the publishers of the newspapers specified above.'

He and his client, Nana Akufo-Addo, therefore sought that the 'severest sanctions to be visited on the newspapers in question in accordance with Act 449' which set up the Commission.

But after several months of back and forth deliberations, chairman for the Media Commission, Kabral Blay-Amihere, on February 6, 2015, issued a statement saying, 'The newspapers failed to respond to any of the invitations and offered no explanation for their failure.'

Aside that the report indicated, 'They also failed to offer any proof or justification for their stories.'

However, after examining the content of the said publications, the Committee came to the conclusion that the stories complained of were indeed against the ethics of journalism.

The Commission has therefore ruled that 'The mentioned newspapers indeed published their allegations against the complainant without adducing verifiable evidence to justify their publication.'

That, it said, was due to the fact that 'The stories do not meet standards and principles outlined in the professional guidelines of the Commission and the Code of Ethics of the Ghana Journalists' Association, which enjoin journalists to observe core journalistic values such as truthfulness, fairness, accuracy and objectivity.'

It continued, 'Accordingly, in line with Section 15 of the NMC Act 449, the NMC directs the mentioned newspapers – namely Daily Post, Ghanaian Lens, The Enquirer, Informer and Al-Hajj – to retract and apologise to the complainant, Nana Addo Dankwa Akufo-Addo.'

The NMC has since advised and directed the Ghanaian media to be guided at all times by the Code of the GJA, Code of Conduct of the Ghana Independent Broadcasters' Association and the various NMC Guidelines.