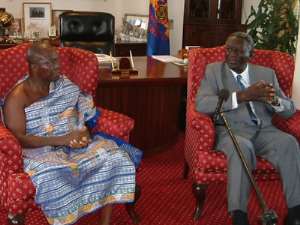 ...Water Projects
Accra, July 26 GNA - Four regions are to benefit from a 30 million-dollar grant (about 270 Billion Cedis) for the provision of potable water under the Asanteman Council's Promoting Partnership with Traditional Authorities Programme sponsored by the World Bank. About 1,000 communities in Ashanti, Central, Brong Ahafo and Volta Regions are to benefit from the grant. This was announced by the Asantehene, Otumfuo Osei Tutu II when he paid a courtesy call on President John Agyekum Kufuor at the Castle, Osu on Monday. The Asantehene was briefing President Kufuor on the outcome of his recent visit to Washington, DC on the personal invitation of World Bank President James Wolfensohn.
He said a report submitted by a group of consultants he sponsored on a nation-wide tour on provision of potable water showed that the acute water shortage within the Cape Coast Municipality affected the people and schools and there was an outbreak of guinea-worm in the Gomoa area. The Asantehene said Brong Ahafo and Volta Regions were included due to the outbreak of guinea worm in some areas and the outbreak of Buruli Ulcer in the Amansie area of Ashanti Region.
He explained that the report indicated that the Danish Development Agency (DANIDA) had financed the provision of potable water to reduce water-borne diseases in the three Northern Regions.
The Asantehene announced that an initial five million dollars provided under the programme was used for the provision of 42 schools, head teacher's bungalows and clinics in deprived communities.
Otumfuo Osei Tutu said he also requested for the establishment of a Private Venture Capital Fund and Plant Pool to enable Ghanaian businessmen to borrow money and hire machinery.
He said this would enable Ghanaian contractors to compete successfully with international companies for Government contracts because local contractors and businessmen did not have the capital to buy machinery.
The Asantehene appealed to Ghanaians not to play politics with the assistance being offered under the programme geared towards Ghana's socio-economic development.
"I am not interested in politics. I am only interested in the development of Asanteman and Ghana as a whole".
President Kufuor said governance was not the preserve of the Executive, Legislature and the Judiciary but that of the entire citizenry within the sovereign state of Ghana; therefore, every Ghanaian, organisation or institution should play an active part in the country's development.
"Everybody is waiting for the Government to take the initiative but the Government alone cannot do it, every citizen should contribute", he said.
President Kufuor said prominent chiefs in the country had taken the initiative towards the development of their areas and Ghana. He commended the Asantehene's initiative for the World Bank grant for the development of Asanteman and some parts of the country.
"The Government appreciates the good gesture of the Asantehene to develop Ghana. He is a distinguished citizen of Ghana, who is contributing to her development".
President Kufuor said the Government had much value for the chieftaincy institution and its role in the country's development.
Nana Otuo Siribour II, Juabenhene, who accompanied the Asantehene on the trip, explained that the assistance was not a loan but a grant and did not form part of the Country Assistance Programme for Ghana. He said it was in appreciation for the Asantehene's initiative to improve the living standards of his people.

'Bawumia, the weak cedi is running; arrest it as you promise...
54 minutes ago