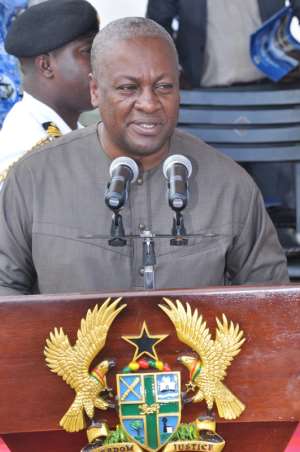 Peduase (ER), Feb. 7, GNA - President John Dramani Mahama at the weekend said he would use his position as Chairman of the Economic Community of West African States (ECOWAS) to propose a high level cooperation against international crisis.

The cooperation, which would be throughout the Continent, would need the support of all African leaders to carve a niche for themselves in the international world.

President Mahama said this during his annual New Year get-together with members of the Diplomatic Corps at the Peduase Presidential lodge in the Eastern Region.

The programme was also attended by Vice President Paa Kwesi Bekoe Amissah-Arthur and his spouse, all Diplomats and their partners as well as some Politicians.

President Mahama said the time had come for African leaders to take their own destinies into their hands by spear heading their development agenda before calling for external support.

The cooperation, he said was demonstrated during the Mobilisation of resources against the deadly Ebola virus disease in Guinea, Liberia and Sierra Leone, as well as flashes of the disease in Mali and Nigeria.

Though promising, President Mahama said the continent could do better to champion the rights and responsibilities of their people.

He said currently, Egypt, Mali, Somalia, Burkina Faso and Guinea were experiencing some political skirmishes and such cooperation could quell the crises in such areas and beyond.

On good neighborliness, President Mahama said he would use his position to consolidate the good relations that existed between Ghana and her immediate neighbours; Burkina Faso, Ivory Coast, Togo among others.

He said five countries; Nigeria, Niger, Ivory Coast, Burkina Faso and Togo were holding their general elections this year and called on the political leaders in those countries to exhibit high level professionalism to avoid rancour and bitterness after the polls.

Madam Pavilin Tendai Musoka, Dean of the Diplomatic Corps in Ghana commended President Mahama for assuming the Chairmanship of ECOWAS and his contribution during the outbreak of the Ebola Virus disease in Guinea, Liberia and Sierra Leone.

She called on African leaders to build stronger capacities that would contain the outbreak of any disease in the continent.