Taking The Ball Home' Is So Easy To Predict! …. 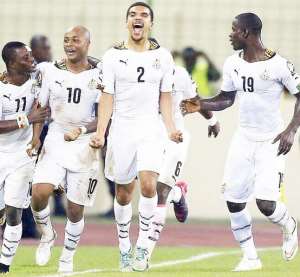 As soon as Equatorial Guinea was allowed by the CAF to jump in and replace Morocco as the host of AFCON 2015, signal bells began to ring in the ears of some of us.

The reason is that Equatorial Guinea is ruled by a noxious dictatorship and dictatorships seize on every opportunity to stage spectacular sports tournaments whenever they can, because such tournaments give them a chance to prove to the world that their people are 'happy' under their totalitarian regime.

Now, sports can be the mother of chauvinism. We almost all remember that when we were kids, the 'section' in which we were placed in our classrooms turned us from friendly beings into adrenalin-filled fiends who would kill classmates in a different 'section' if we were allowed to!

We may also remember how difficult it was to get a ball to play with if one lived in a village. Only the sons of rich parents could afford to buy proper rubber soft balls, for instance, whilst the rest of the pack tried to make do with sponge covered with rags, or oranges if one managed to be accepted into the play-group of a rich man's son who had a rubber ball, one felt enormously privileged. Except when, in the course of play, the owner of the ball wanted - say - to take a penalty and was told that he couldn't do it because he was a bad shot. Usually, that was the end of play, for the guy would just pick up his ball and threaten to walk home with it. We would fume and fret, but there was nothing we could do. Either we allowed him to lose the match for us by wasting the opportunity to score, or we had no ball to play with.

In its match against Tunisia on 31 January, 2015, Equatorial Guinea could be inferred to have influenced the Mauritian referee to award it a dubious penalty against Tunisia. Inferred? Yes - in a bribery and corruption case, an act can be inferred to be corrupt if it is so bizarre that no sane person would have carried it out without being influenced to do so. For, of course, bribery and corruption cannot be easily proved, unless either the taker of the bribe or the giver of it chooses to confess, which is usually unlikely.

True, the referee in this case was blemish-free. And the Equatorial Guinea players were also largely blameless.

But what about the spectators? The proverb says that there are many ways of killing a cat, and it is not outside the realms of possibility that a section of the crowd had been briefed on what to do if the match seemed to be going against their country. With Ghana winning by three goals to nothing, the fuse was lit. Bottles were thrown at the Ghanaian spectators and they had to flee from the stands on to the running track just behind the field of play. Some of the bottles fell on to the field of play itself.

The scenes were ugly. But where were the Equatorial Guinea police to evict the bottle-throwers and throw a cordon of protection around the Ghanaian spectators?

They were notable by their absence. The match was interrupted for nearly half an hour, and it is not difficult to imagine that the Equatorial Guinea trouble-makers expected it to be called off, with the prospect of a replay, in which they would beat Ghana and go to the final. Fortunately, the Gabonese referee showed more mettle than the Mauritius fellow and the match was eventually resumed, for Ghana to win by 3 goals to 0.

Yes, Ghana is going to meet the Ivory Coast in the final on 8 February 2015. But in what spirit will our team go? They will believe that the Equatorial Guinea fans will all cheer the Ivory Coast side and wish the Ghana side to lose.

But the Ghanaians should shrug that 'negative' off and turn into a 'positive', and thereby bring the Cup home. I pray that Asamoah Gyan will be fit enough to play, and that we shall see his victory dance once again.

I won’t be an impediment to free, fair and transparent elect...
20 minutes ago