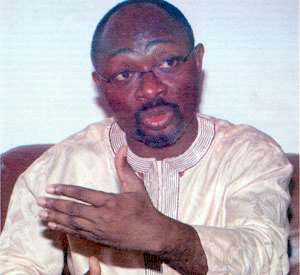 Hearing of an application by the Attorney-General (A-G) seeking leave of the Supreme Court to chase the embattled National Democratic Congress (NDC) bankroller, Alfred Kofi Agbesi woyome, for the fraudulent receipt of Gh¢51.28 as judgment debt, was yesterday adjourned sine die.

This was because Justice William Atuguba, who is part of the panel of judges sitting on the matter, was out of jurisdiction while Woyome too was not in court, neither did he send any counsel to represent him.

There were no indications that all the parties to the suit were served with the application, but Martin A.B.K. Amidu, former Attorney- General and Minister of Justice, who filed the application leading to the Supreme Court order for the money to be retrieved by the state, was in court and after the adjournment, remained tight-lipped about the matter saying, he was served and consequently came to court.

It would be recalled that the Supreme Court, presided over by Chief Justice Georgina Theodora Wood, last year held that Woyome's contract that was abrogated by the previous government - for which the judgement debt was paid to the businessman - was not constitutional and therefore invalid for which reason she ordered Woyome to refund the money. The A-G wants leave to enforce the order.

Mr. Amidu last year prayed the court to have a second look at some aspects of an earlier judgement in which the Supreme Court failed to call for a refund of the said amount pocketed by Woyome; and which Amidu believes should be refunded to the state.

He said the basis of Woyome's claims was in contravention with Article 181(5) of the 1992 Constitution which requires the approval of parliament.

The court consequently held that consent judgment, which the former Attorney- General, Betty Mould- Iddrisu, made with Woyome, should not have been entertained at the High Court.

'A declaration that the conduct of the then Honourable Attorney General, the 1st Defendant/Respondent in this case, in paying or ordering the payment by the Republic of Ghana of claims by the 3rd Respondent and Austro-lnvest, premised upon a purported foreign…. financial engineering agreement arising out of the agreements dated 26th April, 2006, and other international business agreements arising out of the said agreements with the Government of Ghana which were never laid before parliament for approval, is inconsistent with and in contravention of Article 181(5) of the 1992 Constitution in terms of the interpretation already rendered by the ordinary bench and are accordingly declared null, void and without effect whatsoever,' the court said.

Mr. Woyome is standing trial in an Accra High Court presided over by Justice John Ajet Nassam, in connection with the said money and a judgment date on the matter has been set for March 12, 2015.