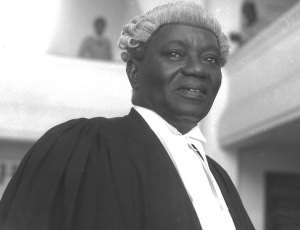 Half a century after his tragic death, J.B. Danquah continues to stir passions and controversies. A few months ago, a misguided Member of Parliament claimed that the man who was kept in a condemned cell, denied exercise and medicine and chained to his bed died of natural courses! I was so upset that I advocated a “punch on the nose” for the offending MP.

Notwithstanding the “All-die-be-die” saying, to claim that Danquah's death was normal is a gargantuan lie. He should have died at home, in his bed, surrounded by family. A few days ago, Abdul Malik Kweku Baako, the respected commentator, in response to the ludicrous claim that the Akosombo Dam was Danquah's brainchild, counseled the NPP and the Danquah family to be factual in their attempts to promote Danquah's image.

While his counsel was appropriate, Kweku Baako should have been more even-handed by counseling J.B.'s detractors to respect the truth as well. As the saying goes, “those who venture to counsel the cat about stealing stinking fish must also counsel the stinking fish”. The baseless accusations about his involvement in assassination attempts and the charges that he was a CIA agent, to pick just two examples, have been unprincipled, beneath contempt and a disgrace to honour and common-sense.

In truth, Mr. Danquah does not need lies from his ignorant supporters to make him great. He achieved a full measure of greatness in his life. Here are a few of the achievements that put his greatness beyond dispute:

• He was an accomplished scholar who was the first West African to earn a PHD from a British University, the winner of the coveted “JOHN STUART MILL PRIZE IN LOGIC AND PHILOSIPHY”, and the author of many significant books, including “AKAN LAWS AND CUSTOMS”.

• His role in picking the name of our new nation-- Ghana.

• His role in the formation of the Ghana Academy of Arts and Sciences.

• His monumental contribution to the development of the rule of law, including his historic argument in the Akoto case in 1961 that dealt with the PDA.

There are more but these must suffice for now. Let no one be fooled about his greatness because he did not become President. Many who have become President are far from great and Gandhi, who never held elective office in India, is considered, without doubt as the greatest Indian of them all.

As we reflect on Danquah's life, we must remember that the lessons are still very relevant.

He was heart-broken that they burnt his books--- and today, half a century later, even some who claim to rally to his banner condemn books and authors they have not bothered to read.

He fought and died for freedom of expression and yet, as recently as 2009, when the NDC won power, there were people in the NDC who wanted the expansion of Nsawam prison and the wholesale arrest of NPP members just because they belonged to the party that had lost power. Indeed, even in the party that he founded on such high-minded principles, today-- there are those who would stifle dissent and settle disagreement with violence.

Finally, I suggest the following:
First, an unqualified apology to the Danquah family, on behalf of Ghana by the President, with a pledge that never again, shall we permit a citizen to die such a disgraceful death just because he/she seeks the betterment of our nation.

Second, the establishment of a fitting memorial to him.” Danquah circle” or any interchange really does not do justice to his memory— Danquah University – may be a more fitting memorial.

Third, that government commits to supporting with adequate resources the memorial lecture that stands in his name--- in perpetuity.

Fourth, the cessation of the wicked calumny against his name, impugning his integrity and loyalty to Ghana. Without him, there probably would have been no Nkrumah in our politics. As the saying goes, “Without Brebre, there would be no Amanee”.

In this regard, I am disappointed that his family, so full of lawyers and so resourceful has not been more vigorous in defending his image and his reputation, in the media and in the courts.

Let us move forward together.