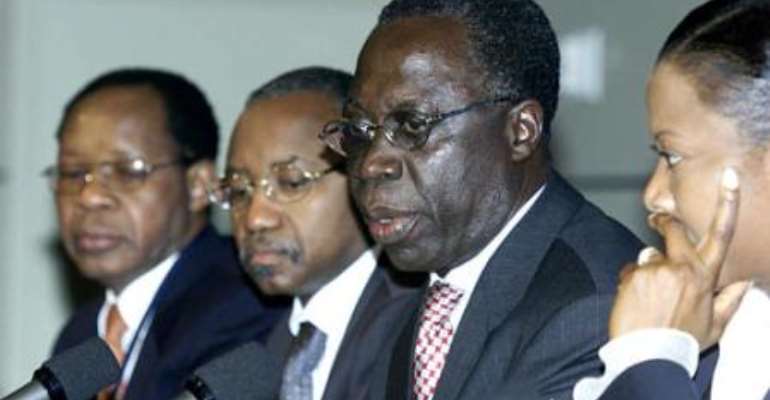 Accra, July 25, GNA - The Paris Club has cancelled more than 1.644 billion US dollars of Ghana's debt it owed members, after the country has reached the HIPC Initiative Completion Point. This means that the country had had more of her debt cancelled under the initiative than the initial 1.5 billion dollars that was projected. Mr Yaw Osafo-Maafo, Minister of Finance and Economic Planning, made this known to journalists at the Kotoka International Airport on Saturday on his return from France, where he held meetings with all the 14 members of the Club. He said Ghana' s debt to the Paris Club creditors had, therefore, been reduced from 1.94 billion US dollars to 300 million US Dollars as a result of the meeting. According Mr Osafo-Maafo, Ghana would have to negotiate with the Non-Paris Club members, notably the multinationals, the World Bank and the International Monetary Fund to have debt the country owed to these financial bodies cancelled. He said the Paris Club requested Ghana to use the HIPC benefits to develop priority areas, identified under the Poverty Reduction Strategy Programme. Mr Osafo-Maafo said the Paris Club also urged Ghana to pursue pragmatic economic measures that would accelerate economic development and to borrow on concessionary terms. On the question of what the debt cancellation would mean to the ordinary man, the Minister said 250 million dollars, which should have been channelled into servicing the country's debt annually, would now be used to provide infrastructure to accelerate economic growth, particularly in deprived areas. He said the Paris Club welcomed Ghana's determination to implement a broad-based and rigorous economic programmes to provide the bases of sustainable economic growth and comprehensive poverty reduction. Government officials that accompanied Mr Osafo-Maafo included Dr Anthony Akoto, Deputy Minister of Finance and Economic Planning and Dr Paul Acquah, Governor of the Bank of Ghana.
They were met on arrival by officials of the Ministry of Finance and Economic Planning.