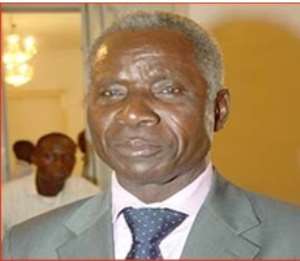 He said handlers of the president are preventing him from seeing the number one citizen of the land.

According to him, "On one occa­sion I had opportunity to meet the president but I didn't even start talk­ing when handlers of His Excellency the President said my time was up and the door was opened for me to leave and honestly, I felt bad since that day."

This revelation was made during an interview with the Alhaj newspa­per.

Apart from that, the retired mili­tary General said he had also tried sending several text messages to President Mahama but was yet to get a response to any of them.

"Alhaji, I want you to tell the president that we can together change this country. All we need to do is to get the needed cooperation and support from the presidency," he was quoted as saying.

Nunoo Mensah thinks his role as the man in-charge of human security is not being recognised. The office is said to exist only on paper with virtually no budget and staff to carry out its functions.

The ex-military officer is not only top man who had expressed similar sentiment. There had been initial claims by the current majority leader and former member of the infamous 'three wise men,' Alban Sumani Bagbin, that the president was inaccessible to even senior members of the government.

After his open complaint he was made the majority leader in Parliament.

At the time, he said "If you go round the ground, the statement people are making is that this is not government of NDC." Instead, he said the Mahama government was for "family and friends."

He therefore stressed the net the National Democratic Congress (NDC) to take over the running presidency because "it is the par that promised the people" and got him elected.

For him, since there were people who wrote the party's manifesto and fought for John Mahama to become president, they ought to "be in-charge of the governance of this country to make sure we implement the promises to the people. President Mahama cannot implement them alone."

Accra: One Killed As 4 Cars, 2 Motorbikes Collide At Anyaa
30 minutes ago