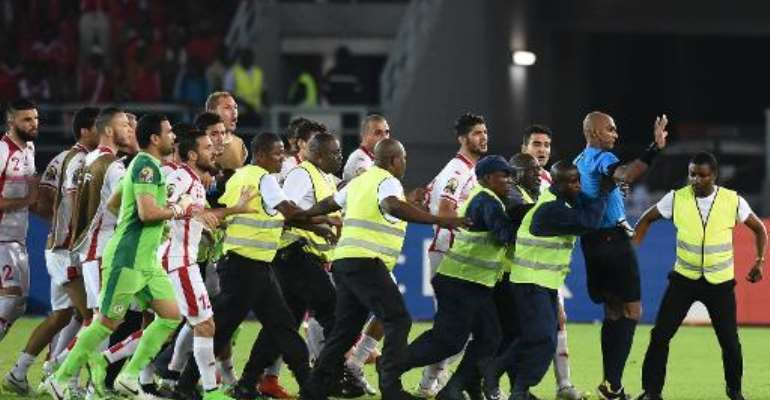 According to an African Football Confederation (CAF) statement, host nation Equatorial Guinea were fined $5,000 for a pitch invasion and warned to tighten security at match venues ahead of the midweek semi-finals.

The CAF referees committee "regretted" the poor performance of Seechurn, who awarded a dubious late penalty from which Equatorial Guinea equalised before going on to win 2-1 after extra-time against furious Tunisia.

The Mauritian has been sent home from Equatorial Guinea and dropped from the CAF elite referees panel.

The CAF disciplinary board fined Tunisia $50,000 for "insolent, aggressive and unacceptable behaviour of the players and officials of the Tunisian team" during the match.

They will also pay the cost of the damages caused at the Estadio de Bata last Saturday.

CAF have also ordered Tunisia to send a letter of apology, or provide evidence of the unfairness of CAF and their officials, before midnight Thursday.

Failure to do so will lead to additional sanctions against Tunisia, including a possible ban from the 2017 Cup of Nations.

CAF also condemned the conduct of Tunisian Football Federation president Wadie Jary, who entered the pitch to criticise the referee.