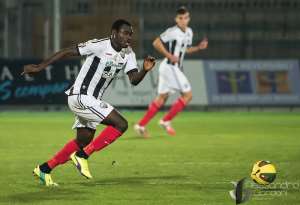 Bright Addae's superb form this season continued after he scored the first of three goals for Ascoli Picchio in a 3-2 win at San Marino to keep leadership of Lega Pro's race for Serie B qualification.

The 23-year attracted interests from Napoli and Udinese this year for his top performances in the defensive midfield role.

The ex-Wa All Stars player could attract the attention of national team selectors should his form continue to the end of the season.