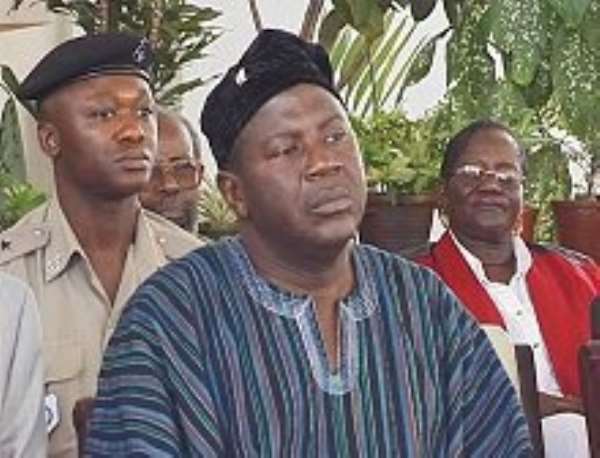 Ghana Town (The Gambia), July 24, GNA - Vice President Aliu Mahama has praised Ghanaians residents in The Gambia for their excellent image and advised them to maintain their reputation as hardworking and law-abiding people.

At a meeting with members of the largest Ghanaian Community in The Gambia, Vice President Mahama said: "In my interaction with the President of the Gambia, Ministers of State, middle-level people and drivers of this country, much compliments were paid to you. The people of the Gambia hold you in high regard and we are proud of you." The Vice President told them that any negative change in their attitude would embarrass Mr Justice Allan Brobbey, who has been appointed the Chief Justice of that country and the entire nation - (Ghana).

He advised them to maximise the opportunities available to them and strive to give their children the best of education. He pledged to discuss their concerns about the high cost of resident and identity cards, the ban on the issuance of commercial driver's licence and their fears of relocation from Ghana Town with President Yahya Jammeh at a meeting scheduled for Saturday.

The difficulties faced in the acquisition of Ghanaian passports would be reduced when Ghana opens an Embassy in Senegal by the end of the year, he said.

Vice President Mahama expressed the hope that the cost of travelling by air to Ghana, which they complained was too high, would be reviewed when other airlines started operating that route in the spirit of competition.

At an earlier meeting with the leadership of the Ghanaian Union and Ghana Town at Karaiba, where the Vice President is putting up, their Spokesman, Mr Kofi Sintim said the total cost of 2,300 dalasis was above their means. The exchange rate of the dalasi to the dollar is about 29.25.

Vice President Mahama urged them to take advantage of the dual nationality scheme to enjoy their rights and freedoms as ECOWAS citizens.

He briefed them about the socio-economic and political developments at home, saying the decision to adopt the Highly Indebted Poor Countries (HIPC) Initiative had benefited Ghana as more than three trillion cedis had been gained in debt repayment to the country's development partners. The fund, he said, had been invested in the provision of infrastructure for education, health, sanitation and other areas to improve the standard of living in poor communities.

"About 800 primary schools have been built so far," he said. He mentioned the creation of 30 additional constituencies and 28 districts, saying they were aimed at bringing government to the doorstep of the people to promote good governance.

The Vice President reiterated the government's commitment to ensure peaceful, free and fair elections and campaigns and asked them to influence their relations at home to support these efforts. Professor Christopher Ameyaw-Akumfi, Minister of Ports, Harbours and Railways, asked them to endeavour to visit home occasionally to have a first-hand experience of the situation in their homes and in their communities.

Mr Akwasi Osei-Adjei, Deputy Minister of Foreign Affairs, cautioned them to be wary of visa contractors, who might deceive them by taking their hard-earned incomes with false promises of sending them to developed countries.

Mr Abraham Osei Aidoo, Deputy Majority Leader in Parliament, told them that their desire to participate in national elections would materialise by 2008 as Parliament was considering legislative reforms to that effect.

The Chief of Ghana Town, Nana Abandoh told the delegation that the community would keep the flag of Ghana high.

Mr Samuel Kwesi Amoah, a 70-year-old man, who is the only survivor of the first 36 Ghanaians who settled in the Gambia in 1961, told the In 1962, they settled at Ghana Town. Most of them migrated from Ekumfi Amuna, near Mankessim in the Central Region.

Vice President Mahama is in the Gambia for a three-day official visit at the invitation of President Yahya Jammeh.

Election 2020: I was very disappointed with the results in U...
15 minutes ago

“So Far, So Good; Bawku Appreciates Your Policies” – Bawku N...
39 minutes ago