Barack Hussein Obama Is Not The Prophecy Fulfilled? 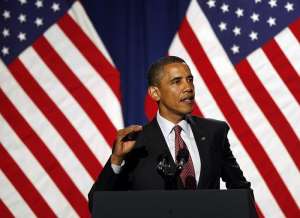 The America president, BARACK HUSSEIN OBAMA (2009 – 2016) has been in the news since 2007 or the day of his political ambition to date. Many people of different religious belief have prophesied about a black person rising to the highest seat in America. Prophets, magicians, astronomers, etc. have said so many things about the future of America presidency.

Even today some people are still prophesising about a black man president. Some of these prophets said that black president would be the last to rule and that would be the end of the world. Others also said, the black man will send America backwards – economic hardship, disasters, increase of demonic activities, breakages of international relations and so on. The black president will make Africa superior than other continents.

This piece of philosophical work analysis and exposes the secret behind President Barack H. Obama presidency and the future of America.

The America Constitution
When Obama was campaigning, it was roamed that some African leaders and some black millionaires across the world massively supported him financially, physically, and spiritually. They supported or advocated for him because:

i. Of the perception of him being a black person and also half African.

ii. He will help bridge the socio-economic gab between the Americans and the Africans.

iii. Immigration policies may favour many Africans to enter America.

v. Sign of equal rights to all in America.
vi. People will realise that black people can also think, analysis things, make judgement and come out with solutions to problems.

vii. Slave trade in all manner of ways (socio-economic, health, science and technology, etc.) may be reduced or eradicated.

The reasons are many; these seven were some of the main reasons of some people supporting Obama. What has been left or was not considered is the America constitution. The constitution of America allows every sound and brilliant citizen to vote, benefit, and be a leader in America if the majority of the people affirm the person through voting. The actual problem was the practice of racism and not the constitution.

The ancient constitution of America was somehow centred on the whites'citizens because there were only majority of whites (98%) in the nation or states and the rest were visitors made of slaves and traders who were not citizens.

Logically it is very difficult for strangers or visitors to rule over the owners of the land. So when the slaves or visitors later became citizens, it became a battle between the original rulers and the visitorswhich were in the form of racism and discrimination. Racism and abuse or discrimination was some of the methods or ways or strategies to prevent or resist the blacks or strangers or visitors to contest or compete in politics.This battle generated a lot of predictions by some black visitors or strangers who became citizens that they hope that one day a black person will also claim on the highest seat of America to rule. I do not think this is a revelation prophecy but a vision and revolution that naturally has to be.

A half American and half African (BARACK HUSSEIN OBAMA) has become president. What paves the way for him to contest the presidential election is the constitution. The people in America understood and accepted his philosophies and voted for him. He is American citizen not African citizen, and an African cannot be president in America. President BARACK HUSSEIN OBAMA cannot do anything without the constitution of America.

Culture
Culturally Americans always thinks about the superiority of their country over other countries first. An African leader considers himself to be overlord of his people and not the country being superior than other countries.

There are poverty, hunger, sickness and diseases, conflict, and some immoralities in Africa becausesome Africa leaders are selfish, wicked, corrupt, agents of demons, are not united, lazy in solving problems, mistrust, time wasting and many others. They are not problem solvers but give excuses. They always depend on some people for survival and were happy when Obama became president thinking he will just give them money and luxury things to use.

Culturally, President Obama would not consider helping others who are competing with his country in socio-economic development and other things. He is for America and would always consider America first not Africa. If he is to provide any help to Africa it must be in the interest of Americans (or the constitution) and not him as a person. Even him as an individual person would consider the welfare and superiority of America over others. The constitution says Americans or America first.

Religion
It is very hard to specifically state where President Obama belongs to. Why because he has Christian, Muslim, African Traditional Religious belief, and other religious background. His religion is for him to decide where he would strongly live by.

Colour
It is up hauling to hear or read that President Obama is the black president of America. He is neither black nor white. He is in between, and he is for all. Not specific group of people. As the late Lucky Dube (a South African reggae musician) said different colours, one people, there is neither black nor white or chocolate, or grey. The blood is red and all people have red blood colour. Whether black or white, we have one blood colour, we all do urinate, eat food, sleep, fall sick, feel pains when harmed, have emotions and psychological feelings, etc.

Racism is a disease and must not be encouraged. One body many parts, one tree many branches and roots. If people are supporting President Obama because of his vision and mission that is fine but should not really because he has a black genes in him.

Interventions in Africa
President Obama has not helped in anything exceptional to Africa. He is only doing what the America constitution is required of him as a president to do. There has not been any effective socio-economic development in Africa when Obama came into power. He is ruling as any American president would rule.

Prophesies
I have already stated in the introduction that many people are claiming that president Obama is the black president prophesied or predicted some years ago to be president.

The said prophesies in all the internet, in books, and other sources may hold or may not be the truth. Those Prophets, magicians, astronomers, etc. who were specific about Obama, by mentioning his name and how he will win and rule may be right. But those who just predicated that someone with black skin may rule one day in America may be just a predication and not prophesy. Since the world has not come to an end and nobody knows when the world would be ended, no one can conclude that President Obama is the black president ever in America. If it is the colour that some people are basing their argument on, then they might be committing error because a dark black person born by parents both black from black skin colour family may become president in some years to come. Very dark black skin colour is likely to become president in America. The former United Nations secretary general was very dark in colour (black), he is from Ghana and the UN policy allows citizens of all member nations the right to contest in the general secretary and otherposition. That's how the America constitution also allows the citizens to contest election in America.

Africa and America politics
As already stated, America and Africa are competing in Socio-economic development and in other things. Americans wouldn't want Africa to be at the same level with them in economics, science and technology, and many other things; and this is natural politics. If Africa develops America and other continent may be in trouble in economic wise. Because America depends on Africa for rich natural resources, and if Africabecome knowledgeable in how to convert raw materials to finish product America may suffer in socio-economic policies.

The strategies of America and other developed nations are that, they wouldn't want Africa to know science and technology, and other developing strategies. This is politics and in politics the strongest survive. It is about strategies, discipline, trust, visions, repentance, self-encouragement, and faithfulness.

The conflicts and socio-economics problems in Africa are created by the external forces and some co-operate aimless and wicked Africa leaders. The external forces are those who supply weapons and finances to Some Africans who are killing people for their selfish interest. Can those external forces be blame much; I think no, because it is a political agenda and would want to control Africans always.

The America manufactures these destructive weapons for protection and economic gains. For them they are selling and whoever buys from them is not their concern. The ones they do not sell are what can be used against them. President Obama cannot stop the conflict in Africa because it is politics. The only thing the America is doing wants to do bloodless politics with Africans. They are engaging in politics where innocent blood would not be shared. But the co-operate Africans because of their personal gains (to rule or be overlord of his people) shares blood.

Africa leaders
Some are not problem solvers but always give excuses. Some do not care whatever may happen to their citizens. President Obama cannot ask some wicked Africa leaders not do what they are doing because it will benefit them. The only thing they normally do is trying to save innocent people not to be killed but is not enough.Already the America is competing with Africa and in some ways when Africa is kept in under develop it benefits them.

Africa leaders have to do away with corrupt practices and focus in developing the continent. They have to stop depending on the America always for aid which comes with conditions of keeping Africa under develops. They have to invest in education and youth development initiatives.

The humanitarian work that America should insist in Africa is the band of shipping war machines, guns, and other destructive weapons and financing of conflict by some individuals and some states.

NOTE:
Dear reader this article was taken from a book written by Maxwell Kobina Acquah (PhD). The book is under review and editing and will be release out. Most of the information can be found in the author's works (books).

Maxwell is well educated and trained to address major "critical issues affecting every aspect of human, social, and spiritual development" with thorough analysis. He is very talented and gifted in his presentations and in the writings. He has written couple of social, motivational and inspirational books. He is a teacher, counsellor, a consultant, motivational speaker and a mentor. He is available on many social networks.

His favourite Bible quotes are:
Matthew 6:33 But seek ye first the kingdom of God, and his righteousness; and all these things shall be added unto you.

John 14:6 Jesus saith unto him, I am the way, the truth, and the life: no man cometh unto the Father, but by me.

Jeremiah 30:2 Thus speaketh the LORD God of Israel, saying, Write thee all the words that I have spoken unto thee in a book.

Proverbs 2:6 For the LORD giveth wisdom: out of his mouth cometh knowledge and understanding.

BOOKS by Maxwell Kobina Acquah (PhD)
Check out, I am now a published author
1. The World Leaders and Homosexuality Legalisation: The Secret Behind

www.facebook.com/mkacquah
2. Life After Death: Where Would You Be If You Die Today

4. There Is A Condition: Recognising The Conditions of Successful Life