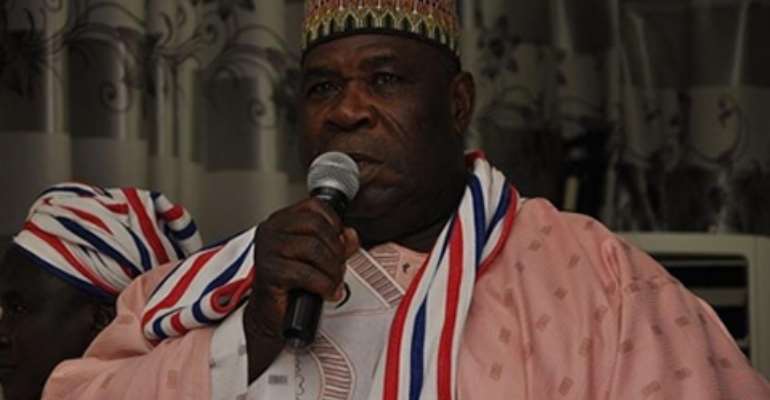 The New Patriotic Party (NPP) has ordered investigations into the infa­mous Bugri Naabu tape in which a voice that sounded like his was heard accusing certain key and influential personalities in the party of being in bed with the ruling National Demo­cratic Congress (NDC).

In a statement issued and signed by the party's General Secretary, Kwabena Agyepong, the NPP Steering Committee expressed concern about the said tape, and was hopeful the probe "will expose any mischief meant to undermine the unity of the party."

In view of the gravity of the allega­tions made on the said audio record­ing and the subsequent denial by Mr Bugri Naabu, "the National Chairman has directed that the audio recording be forwarded for forensic examina­tion", the General Secretary said.

On the said recorded tape which emerged sometime last week, a voice , which sounded like that of Daniel Bugri Naabu, who is the Northern Regional Chairman of the opposition party, was heard making some unsubstantiated allegations.

Chief among them was that incum­bent NPP National Chairman, Paul Afoko, his General Secretary, Kwabena Agyepong, former General Secretary, Nana Ohene Ntow, and others were working against the presidential candi­date of the NPP, Nana Addo Dankwa Akufo-Addo.

Aside that, the person claimed these senior members of the party had collected various sums of money from the rul­ing NDC to scuttle the NPP's efforts to win the 2016 general elections.

Bugri Naabu subsequently issued a statement to deny being the one whose voice was heard on the tape.

The statement said "having listened to the tape several times in the presence of other people, he wants to make it clear to the general public and members of the NPP that the statements attributed to him are not true, nor the alleged voice his own," the state­ment said, adding that he saw it as a cal­culated attempt to sow seeds of discord between him and the leadership of the party and to tarnish his hard won repu­tation.”

He therefore called on the leadership and members of the party, the media and the general public to disregard the contents of the tape since according to him, it was an attempt by his enemies and people who do not want to see an NPP victory in 2016 to divert attention from the real issues facing the country at this time.

Even though Bugri Naabu has denied being the one whose voice is on the said audio recording which has since gone viral, claiming among other things that it was part of attempts to destroy his reputation and sow seeds of discord within the party, leadership of the NPP believes there is the need to dig deeper.

At its meeting held on Tuesday, Jan­uary 27, 2015, the Steering Committee of the NPP agreed that "a thorough inves­tigation into this matter is justifiable, in order to ascertain the identity of the voice on the tape and the veracity of its contents."