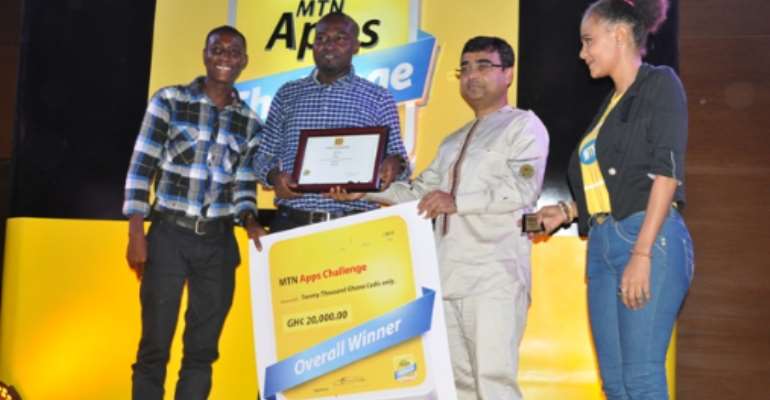 MTN Ghana launched the second edition of its app challenge dubbed MTN Applications Challenge Version 2.0 in October 2014 and received over a hundred entries from developers from the Greater Accra, Ashanti and Central Regions.

The challenge was centered on the development of applications focused on education, lifestyle and games.

The second edition of the apps challenge was, thus, to provide an opportunity for Ghanaians to develop their own applications.

All the apps received were scrutinised by distinguished experts who were drawn from the telecoms industry and the academia.

The entries were then assessed based on innovation, functionality and commercial viability. The apps were then shortlisted to 20 and final winners selected from the list.

At a ceremony to award developers who entered the competition held at the Movenpick Ambassador Hotel in Accra, Chief Executive Officer of MTN, Sereme Taukobong said the company has a responsibility to ensure that Ghana plays a significant role in the apps industry.

He said MTN recognises the importance of using technology as a tool to promote human development hence the decision to encourage indigenous developers to come out with their own applications.

The BuzzTrick app was developed to help in dissemination of news, events and any information that influences people's life. The app presents this information in the most exciting way.

Nana Ekow Taylor who spoke to Myjoyonline,com said the group, even as it has won the challenge, will continue to develop apps that provide answers to the everyday questions that people ask.

“We want to make BuzzTrick a household name and so everyone should expect more from us.”

They received a cash price, a plaque, an expense paid trip and GHÈ»20,000.

The group also came first in the lifestyle category and will receive a cash prize, a Huawei Y220 and 1GB data from MTN for 12 months.

Isaac Onwukwe and Wilfred Attipoe came first in the Games and Entertainment category with their app 'Tales of Hasan'.

Tales of Hasan is an intriguing adventure game focused on the traditional Ghanaian culture, presented in a fun way.

Wilfred Atipoe, said their love for action and adventure games influenced them to develop the app. They hope to build the gaming industry though the development of many more gaming apps.

The 'Whisspa' app developed by Stefan Froelich came second in the lifestyle category.

Stefan said the music app will allow Ghanaians discover African music online. The music can either be downloaded or purchased.

The app is tuned solely to the African market and focuses exclusively on African music.

The app will be available at the MTN Play store and Google play store for download.

Richard Duodo was crowned the Most Promising Developer. His app, Vitual High School won silver in the Education category.

He said it was a great opportunity to be part of the challenge and that this encourages him and his team to do more.

Both winners and participants in the challenge expressed their gratitude to MTN for coming out with the initiative.

Adu Kwabena and Jesse Cofie won bronze for thier Quizlead app in the Education Category.