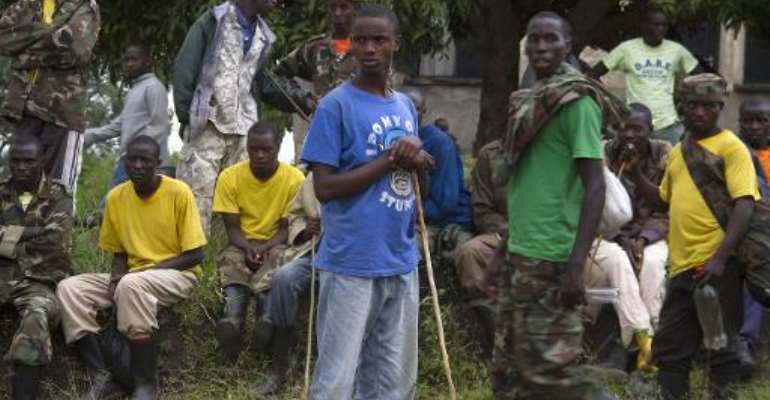 Members of the Democratic Republic of Congo rebel group M23 stand at the Ramwanja refugee settlement on December 17, 2014. By Isaac Kasamani (AFP/File)

Kampala (AFP) - Uganda has issued a three-month ultimatum to Democratic Republic of Congo to relocate hundreds of ex-rebel fighters or they will be handed to the United Nations, an army spokesman said Thursday.

The deadline follows clashes between the defeated M23 rebels and the Ugandan armed forces last month, when attempts to repatriate the insurgents saw around 1,000 fighters escape their camp in western Uganda, fearing for their safety if they were sent back to DR Congo.

Uganda army spokesman Paddy Ankunda said some 800 ex-rebels are being held at Bihanga, a military camp in western Uganda. Around 120 were flown to DR Congo in December.

"We told them if they are not taking them within three months, their people, they will be handed to the UN," Ankunda told AFP on Thursday.

It was not immediately clear when the deadline would come into force.

The M23 rebels' 18-month war, during which they briefly seized the key eastern DR Congo town of Goma, capital of mineral-rich North Kivu province, was brought to an end in 2013 by government troops and UN peacekeepers.

The fighters fled into neighbouring Uganda and Rwanda, and signed papers last May vowing not to fight again in return for a possible amnesty.

While the M23 was defeated, multiple armed groups still operate in a region that has been in conflict for the best part of two decades.

Much of the rebel activity consists of abuses against civilians and illegal exploitation of natural resources such as metals, ivory or timber.