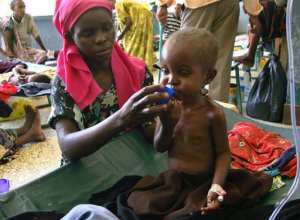 Nairobi (AFP) - Over 38,000 Somali children are at "high risk" from dying from starvation despite hunger levels improving by almost a third across the war-torn nation, UN experts said Thursday.

The grim assessment, based on the latest data collected by the UN, comes just over three years since intense drought and war sparked famine in the Horn of Africa nation, killing more than a quarter of a million people.

In total, over 731,000 people, including 203,000 children who are severely malnourished, face "acute food insecurity", according to a joint report released by the UN's Food Security and Nutrition Analysis Unit (FSNAU) and the US-funded Famine Early Warning Systems Network(FEWS NET).

But the total number affected is a drop of 29 percent from last assessments covering the past six months, with "relatively good rains" in late 2014 helping farmers.

"Many children remain acutely malnourished, despite a small decrease in their numbers over the past six months," the statement read.

"An estimated 202,600 children under the age of five are acutely malnourished, including 38,200 who are severely malnourished and face a high risk of morbidity and death."

Three-quarters of those in dire need are those who have fled their homes, mainly due to continued fighting.