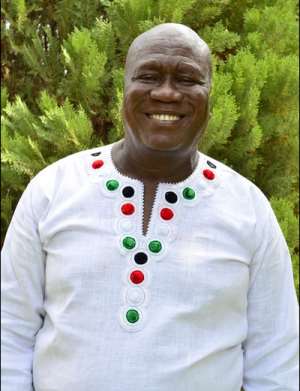 There is a huge public outcry for the Coordinator of the National Disaster Management Organisation (NADMO), Kofi Portuphy, and his deputy Anita De Sosoo to resign from their positions in the public service or get pushed.

It follows their election into office as national chairman and vice chairperson respectively of the ruling National Democratic Congress (NDC), which critics believe can compromise the very public offices they hold. Mr Portuphy appears to be the main target.

After their elections, calls have also come from various quarters, including civil society organisations and individuals like the Member of Parliament for Tema East constituency, Daniel Nii Kwartei Titus-Glover, Kwesi Pratt Jnr and the Alliance for Accountable Governance (AFAG), among others, for the two to resign their positions from the state-run relief agency.

'In a country with high budget deficit, over-taxation, high unemployment and cost of living, Kofi Portuphy, the national chairman of the NDC, without any disaster occurring, could spend in excess of GH¢300 million on relief items in the last quarter of 2012. Ghostly as this expenditure was, we are yet to know of Mr Portuphy's response to Dr Kwabena Adjei's allegation that he bribed delegates at their last national congress in Kumasi,' AFAG said in a statement issued in Accra yesterday.

'Where that NADMO funding went to, and how Mr Portuphy got funded for his NDC's chairmanship race, remain questionable,' the statement noted.

NADMO, under the leadership of Portuphy, was said to have been credited with about GH¢300 million in the GH¢8.7 billion overspending recorded by the Mahama administration in the 2012 elections.

AFAG wonders why Portuphy is still at post, in view of the allegedly reckless overspending in 2012. 'This notwithstanding, the president sees no need in giving him a sack. Getting rid of Mr Portuphy is inexcusable. Mr President, it appears Ghanaians must draw your attention to virtually every issue for a decision to be taken under your reign. This situation unnecessarily brings to contention, your depth of appreciation of good governance,' AFAG stated.

The pressure group was of the opinion that the NDC national chairman's behaviour was a bad example and a precursor to weakening of state institutions.

Pratt Jumps In
Kwesi Pratt Jr., managing editor of the Insight newspaper, said it was difficult to understand why Portuphy was still at post, stressing, 'If I were him I would have resigned by now.'

'The man contested for the position of the national chairman and won; he continues to be the NADMO boss? With this, whatever happens at NADMO can easily be politicised. In his own interest and the national interest, I am appealing to Kofi Portuphy to leave that job. He should not even wait for the president to tell him to go before he goes,” he opined.

Kwesi Pratt said even though he was not saying the NDC chair was going to misuse his position at NADMO, he must resign because “if NDC is no longer in power, he becomes the leader of the party.'

The journalist and social commentator said he didn't have anything against Portuphy.

'I am not saying he will be bias but I think that since he is the chairman of the ruling party, he must leave NADMO and allow another person to do the job,' he stressed.

A senior lecturer at the Political Science Department of the University of Ghana, Legon, and governance expert, Dr Ransford Gyampoh, contributing to the debate, observed that it was inappropriate for Portuphy to remain at post.

Justification
'NADMO is a public organisation and it belongs to the public and so its leadership cannot do active partisan politics. The public service and the civil service operate on the principle of political neutrality,' he explained.

Dr Gyampoh recalled how the then chief director at the Ministry of Health, Alhaji MND Jawula, was made to resign his position when he wanted to become the vice presidential candidate of the opposition New Patriotic Party (NPP), just as Professor Dr Kwabena Frimpong-Boateng was made to step down as Chief Executive Officer (CEO) of the nation's premier health facility, Korle Bu Teaching Hospital (KBTH), when he was running for the flagbearer position of the NPP.

'He should have even resigned before going to contest for the chairmanship of the NDC; he didn't do that and if the rules of the game are working, if institutions are working, I think he should just go,' Dr Gyampoh said in reference to Mr Portuphy, even though same should have applied to Anita De Sosoo, who was appointed as deputy national coordinator of NADMO when she was NDC women's organiser.

This, the senior lecturer said, was because 'You are dealing with the public; and the organisation that you preside over is supposed to be headed by people who do not do active partisan politics. You don't have to be seen to be belonging to one political party or the other.'

He continued, 'So I think in the best interest of the principles as espoused by the German Sociologist Max Webber, who brought about the ideal type of the bureaucracy of the civil service, I think he should go. He should be the national chairman and allow other people who are not doing active partisan politics to come and take over the job.'

Argument
Titus-Glover also seems to agree to allegations that Kofi Portuphy abused his office as NADMO national coordinator by distributing relief items, including rice, cement, mattresses and others, to allegedly entice people for votes when he was contesting for the NDC chairmanship position.

The Tema East MP feared that if the two were made to remain at post at the relief agency, they would use state funds to run the 2016 elections campaign of the NDC.

Speaking on Oman FM , the MP accused the duo of using state resources and productive hours to aid themselves in their campaign to rise up to their current positions.

'This is the time that Kofi Portuphy and Anita De Sosoo should both resign from NADMO. National chairman of NDC is managing the resources of National Disaster Management Organisation of this country…you need to tender your resignation now and Anita as well. They both have to resign. We have to launch a demonstration for their resignation,' he said.

“This work is a full-time job and so why are they still in office? We are just looking at them to do whatever they want in this country?' he wondered.

Pressure
Meanwhile, a group calling itself the Patriotic Action For National Interest (PANI) has also joined the calls for the two to step down or for President Mahama to immediately relieve them of their positions at NADMO.

A statement which was jointly signed by one Kwame Kobri and his colleagues, Nana Kwame Nketiah, Nana Poku Frefre, Badaru Askanda Adam, Gilbert Nana Afoakwa, John Kekeli Bansah and Nana Kofi Owusu pointed out, 'We all witnessed how he used state funds to induce NDC delegates to vote for him during their internal contest. Dr Kwabena Adjei, who was seeking re-election, said the NDC's election was characterised by 'exploitation and monetisation.''

It was for this reason that they said, 'We believe that the manner in which Kofi Portuphy ran his NDC chairmanship campaign is only a harbinger of what he will do in the run-up to the 2016 general elections' and for which reason he and Anita should or be made to vacate their positions at NADMO.